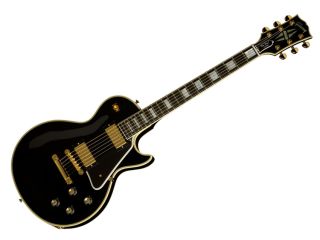 Equipped exactly like the originals, it carries the legendary pairing of Tune-o-matic (ABR-1) bridge and stopbar tailpiece developed by Ted McCarty to give added adjustability and sustain to the first Black Beauty, along with the kidney button Grover Rotomatic tuners that were considered a major upgrade back in the day.

The "Black Beauty" debuted late in 1953 to instant acclaim, but it would be a few years before the design would reach its zenith. The 1960 Les Paul Custom, upgraded with two gold-plated PAF humbucking pickups and a super-fast, slim neck, is often considered the epitome of the breed - and it's back and dressed for the ball, in the form of the Gibson Custom Shop's new 50th Anniversary 1960 Les Paul Custom.

Just like the original - intended to emulate the tux a jazz artist would wear to perform at a formal function - the 50th Anniversary 1960 Les Paul Custom has a high-gloss nitrocellulose ebony finish, multi-ply binding on body and headstock, an ebony fingerboard with mother-of-pearl block markers, a larger headstock with mother-of-pearl split-diamond inlay, and gold-plated hardware throughout.

A pair of Gibson's BurstBucker humbucking pickups - a #1 in the neck for smooth, articulate tones and a #2 in the bridge for more sting and punching power - accurately represent the legendary PAFs of the late '50s and early '60s, and are made with unpolished alnico magnets and coils that are wound with unequal turns of 42-gauge enamel-coated wire to induce that single-coil like bite and edge of the originals. To top it all off, routing them through high-quality CTS pots and "bumblebee" tone capacitor keeps your signal sweetly vintage.

Just as significant, though, are the details that you don't see: the 50th Anniversary 1960 Les Paul Custom is built with the long neck tenon that gave added resonance and sustain to the original, its period-correct nylon nut is cut on the PLEK for ultimate accuracy, and beneath the guitar's gloss ebony finish lies a body carved from one piece of solid mahogany, a tonewood known for its blend of warmth, richness and clarity.

Produced in extremely limited numbers in 1960, original Black Beauties are nigh on impossible to come by today. With its historically accurate details and appointments, the Gibson Custom Shop 50th Anniversary 1960 Les Paul Custom is the finest replication of the model that has ever been produced. Each example comes with a plush-lined Gibson Custom hard shell case, a Certificate of Authenticity, and full owner's literature. MSRP $7,508