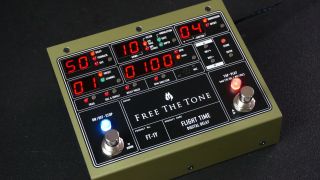 The Flight Time FT-1Y delay, which runs off a 12-volt power supply that draws 400mA, has been long in development, but Free The Tone are claiming several breakthrough functions for it. These include the Realtime BPM Analyzer, which takes a tap-tempo entered by the user via a footswitch and hones its accuracy by +/-20 percent automatically as you play. The FT1-Y also allows users to apply a Delay Time Offset function which finely adjusts the degree to which the delay time is off-tempo.

The latter feature is designed to prevent the delayed notes being masked by flow of on-tempo notes that follows, by offsetting the delays a little off the core tempo. This opens up extra creative options, Free The Tone claims: setting the time value shorter than the current BPM enhances speed picking while setting it longer than the core tempo, adds extra atmosphere to washes of long delay. These functions are served up by a 32-bit DSP that also offers modulation, sound-hold, record & repeat, and delay-phase functions, while favourite delay sounds can be stored on up to 99 user presets.

In common with Free The Tone's other pedals, the pedal features the Holistic Tonal Solution circuit which aims to eliminate both 'tone-suck' associated with buffered pedals and the treble-sapping capacitance problems caused by long cable runs and multiple true-bypass pedals. High and low-pass filters for the delay tails add to the tone-tweaking possibilities.The Flight Time will go on sale in the UK for £377.