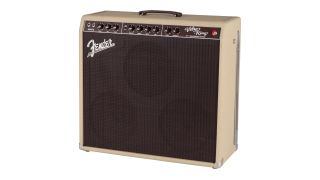 Fender is marking two decades of the Vibro-King with a 20th Anniversary Edition amplifier.

The Anniversary Edition will be available in black, blonde and brown colourings with the option of silver, oxblood and wheat grill cloths, and will feature hand-wired circuitry.

Fender introduced the Vibro-King in 1993 to great acclaim, marking a return to a great hand-wired amp tradition while including a previously unavailable selection of sought-after features.

In the two decades since, guitarists and amp aficionados everywhere have prized the enduringly classic Vibro-King as one of the most touch-sensitive amps ever, with sparkling-clean shimmer at lower volumes and powerfully thick overdrive when cranked up. Fender now commemorates those two decades of pristine tone with the release of the Vibro-King 20th Anniversary Edition amplifier.