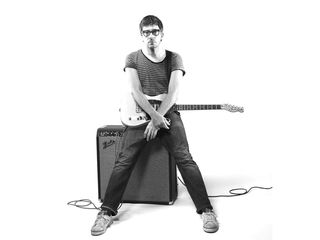 Blur guitarist, songwriter and solo artist Graham Coxon was one of the most inventive guitar players of the Britpop era, and more often than not, a Telecaster was his weapon of choice. It seems only fitting then that the all-too-often underrated star is set to be honoured with a European-only Fender signature model.

"Graham Coxon emerged from the 1990s Britpop movement as one of the UK's most acclaimed and distinctive modern guitarists. Through his hit-filled career with Blur and a highly renowned solo career, his sonic paintbrush of choice is most often a Telecaster guitar, and Fender now honours him with the European-only release of the signature Graham Coxon Telecaster.

"Coxon is well known as one of modern rock's most avid aficionados of the Telecaster - 'The first guitar I reach for,' he said, and 'One of the guitars I used to draw when I was at school and dream of having.'

"Now he has one with his own name on it. The Graham Coxon Telecaster has a distinctive combination of a blonde finish ash body, tortoiseshell pickguard, vintage-style single-coil Telecaster bridge pickup and Seymour Duncan '59 SH-1 humbucking neck pickup with a black bezel for tone ranging from clear and sharp to warm and round.

The Graham Coxon Telecaster has a MSRP of £720 and is available now. Visit Fender for more.