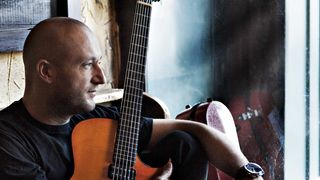 "The most difficult thing for me on this album was trying to find my own voice," says virtuoso jazz-fusion guitarist Fabrizio Sotti, talking about his new disc, Right Now, due out on 14 May. "I needed to put my own signature stamp on songs that everybody knows. That's not so easy. As a musician structuring the material but also as a guitarist, I needed to get inside the songs, where they became mine. Once I was at that point, my playing came very naturally to me."

Along with several heavenly originals, Right Now features Sotti's idiosyncratic jazz spin on a collection of popular classic rock tracks, such as Pink Floyd's The Wall, U2's One and Jimi Hendrix's The Wind Cries Mary. Fabrizio claims that the spirit of Carlos Santana entered his head as he tackled the cover tunes.

"I love how Carlos can put his stamp on anything," he says. "He can play a song that he didn't write, but there's never any doubt that it's Santana. His guitar sound is as recognizable as any human voice, and I think he accomplishes that by getting inside the songs. That was my goal on this album."

Fabrizio sat down with MusicRadar to talk about working with artists such as Ice-T, M1 and Res on Right Now, how he picked which songs to cover and the guitars that are never far from his side.

As a guitarist, did you push yourself on this album in ways that you haven't before?

"Probably more as a musician overall than a guitarist. I wanted to break some new ground on this album. It's the first time where I tried to combine all of my experiences as a producer on one record. I was influenced by Herbie Hancock, the way he used different types of artists who had nothing to do with jazz, and he wound up with something unique that still sounded like him. That's where I wanted to go."

What were the main guitars you used?

"My main electric guitar is a Marchione semi-hollow body. It's an incredible guitar. Whenever I play electric jazz, that's the one I rely on. As far as classical, I also use a Spanish, nylon-string guitar that's made by Marchione. I did use a few regular acoustic guitars, both six- and 12-stringed models."

How do you go about choosing which songs to cover? Do you search around on your iPod and pick out your favorites?

"For this album, my approach was to pick songs that I was attached to, for whatever reason. At the end of the day, I gravitated towards songs that I was really attached to as a kid. Waiting In Vain, The Wind Cries Mary, Pink Floyd's The Wall - I listened to those songs a lot when I was younger. I was older when U2's One came out, but I've always loved that band, and that song was something of an emotional choice for me."

You do bring a real wistful quality to One. It's quite different from the original.

"The message is so beautiful, and it's something I always responded to. One is a perfect song that rolls really well, but yeah, if you listen to it, I reworked it quite a bit. I tried to create an ambiguity in it, so when Isabella [Lundgren] sings a very clean melody, the harmony behind it is quite mysterious. The original has clear chords, but mine take you to a very magical place.

"I didn't think about The Edge when I played my version, but I can't deny what he's done for the guitar. He made new sounds and created a style that's all his own. A lot of people only recognize brilliant soloists, but he's just as important for his breatkthroughs."

What about The Wall? How did you hook up with Ice-T and M1 for this?

"I used to listen to The Wall all the time. It was the soundtrack of my childhood, for sure. When I decided to do it, I knew that I needed people whose intellect were just right for the song. I've worked with Ice-T and M1 before as a songwriter and producer, and I knew what they were capable of.

"If you listen to the lyrics, it talks about discomfits in society and needing to listen to yourself and opening your eyes. There's many layers to it. Those guys did a fantastic job on it, I must say."

For many guitarists, Jimi Hendrix is the Holy Grail. You certainly don't try to sound like Jimi on The Wind Cries Mary.

"No, that would be a mistake, I think. Honestly, you have to take Jimi out of your head. When I first heard him, I was probably 10 or 11 years old, and like it was for every guitar player on earth, he totally changed my life. So for me to copy his approach, I didn't want to do that, even though I did play to him as a kid and try to figure out what we was doing.

"I was just trying to take a master's amazing song and do my own version, so there's a big difference in what I do. You really don't have to imitate a genius to get to the heart of what he did; you just have to be inspired by what he did to pay tribute."

Your version of Bob Marley's Waiting In Vain is pretty striking in that it's not reggae.

[Laughs] "No, it's not reggae. I wouldn't even know how to define rhythmically where we went with it. [Drummer] Mino [Cinelu] comes from Martinique, and he has a really interesting musical approach. But in whatever scenario he's in, he always makes the rhythm move. It's really hard for me to label what we did with the song, but no, it's not reggae.

"The main thing I can say about it is that, rather than take a standard guitar solo, I was having a conversation with Shaggy and Res. My guitar was a third voice, so I was just complementing what they were doing. The whole thing moves and floats nicely."

Of your originals, Prancing Horse is a beautifully playful track. Talk to me about how Enzo Ferrari figures into it.

"Prancing Horse is a song that I wrote and dedicated to him, yes. I'm Italian, and as a kid growing up, probably before I could write or read, I was fascinated by Ferrari; I knew everything about it. It's just something that's in the Italian DNA. So, later in life, if I could switch careers, I would drive Ferraris and race them. I decided to write a song that would convey, as you said, that playfulness and adrenaline of racing. I wrote Prancing Horse in a flamenco style, which is the first time I've done something like that. I've played flamenco guitar, but never write a song in that style."

The meditative title track casts a warm glow. Did you always have it in mind as an album closer?

"Actually, it was the last song I wrote for the record. It can be pretty hectic trying to get all of these artists together, what with their schedules and everything. One day I was listening to the whole album, and I wanted something that was, as you said, a meditation, almost a goodbye after all of this excitement of recording with friends and everything that we did. It was a way to take you out of the record easy: 'Goodbye. Thanks for coming. See you on the next album.'"