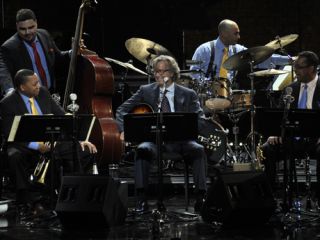 Billed as Wynton Marsalis & Eric Clapton Play The Blues, the collaboration of the two musical virtuosos brought to life a repertoire of songs selected by Clapton and arranged by Marsalis.

A recording culled from those concerts, Wynton Marsalis & Eric Clapton Play The Blues - Live From Jazz At Lincoln Center, will be released on 13 September as both a CD and CD/DVD package. The DVD will also feature a bonus performance of the classic Stagger Lee from legendary bluesman Taj Mahal's opening solo set.

For these shows, Marsalis and Clapton were joined on stage by Dan Nimmer (piano), Carlos Henriquez (bass), Ali Jackson (drums), Marcus Printup (trumpet), Victor Goines (clarinet), Chris Crenshaw (trombone, vocals), Don Vappie (banjo) and Clapton's longtime keyboarist/sideman Chris Stainton. Marsalis says the group combined the sound of an early blues jump band with New Orleans jazz to accommodate the integration of guitar/trumpet lead, a combination that gave the musicians the latitude to play different grooves, from the Mississippi Delta to the Caribbean and beyond.

The band navigated a diverse set list that touched on different styles, from the driving, four-on-the-floor swing of Louis Armstrong's Ice Cream and the Southern slow-drag of WC Handy's Joe Turner's Blues to the traveling blues of Joliet Bound and the boogie-woogie jump of Kidman Blues. The one song not selected by Clapton for the show was his own composition Layla, which was requested by bassist Henriquez and arranged as a Crescent City dirge.

Having thoroughly enjoyed last year's one-track pairing of Clapton and Marsalis - the two made very sweet sounds on the charming jazz number My Very Good Friend The Milkman on the album Clapton - we're looking forward to a full-length offering from these two icons.