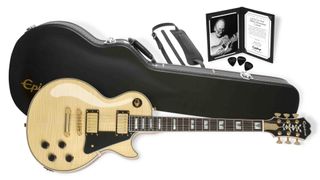 9 June 2015 marked what would have been guitar innovator Les Paul's 100th birthday, and - better late than never - Epiphone is commemorating the occasion with the release of the Ltd Ed Les Paul Custom 100th Anniversary.

Visually, the 100th Anniversary is packing the bling, with 24K gold-plated hardware, abalone and pearloid block and triangle inlays plus a vintage-style Epiphone logo with a zirconium gemstone and 100th Anniversary hardcase.

A zirconium gemstone dots the 'i' in Epiphone, while the 24K gold-plated truss rod cover bears the words 'Les Paul 100th Anniversary'

Elsewhere, the guitar offers plenty of pizazz on the spec sheet, too, with a AAA flame maple veneer-topped mahogany body, 1960s SlimTaper neck and ProBucker humbuckers with coil-splits.

The Ltd Ed Les Paul Custom 100th Anniversary is available soon for £619 - head over to Epiphone for more.