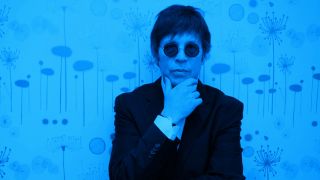 No man is an island... unless it's guitarist Elliot Easton on his own Easton Island.

For guitar enthusiasts who thought that the highlight of any great Cars song was Elliot Easton's infectious, impeccably composed riffs, call-and-response lines and solos, word that the six-string maestro has his own instrumental album will be greeted with resounding hosannas and huzzahs.

"I've been having the best time with this," Easton raves. "What happened was, I was having something of a hangover from The Cars. I just didn't want to go into another pop-rock thing. Plus, I wanted to stretch myself a bit and do something that was more harmonically challenging and sophisticated. I always loved this kind of music, so I decided to make a real band out of it."

Easton recently sat down with MusicRadar to talk about how the band took shape, the guitars and gear he used for Easton Island, and how he sees himself in his new role as bandleader.

The band has origins dating back to the '90s. You released a song, Monte Carlo Nights, as Elliot Easton's Tiki Gods on the Pulp Fiction soundtrack, but only you were credited.

"That's because it was just me - I played all of the instruments. The old stuff was me sitting at home with my old Akai 12-track. I called it Elliot Easton's Tiki Gods even though it was a solo project at the time.

"The genesis of the real band happened when I became better friends with Nick Walusko from The Wondermints and from Brian Wilson's band. We hit it off and found that we had a lot in common musically. I was doing a Rock And Roll Fantasy Camp, and Brian Wilson and his band happened to be the night's entertainment. So I was hanging out with Nick and some of the guys from the band, and we had a great time talking and joking. We realized that we all grew up with the same TV shows and movies.

"I guess there was a lull in the Brian Wilson thing, and so Nick brought in a guy named Todd Jaeger, who plays keyboards and theremin. The first day we got together and wrote a song called Jill's Theme. It felt so good right away, and so I was like, 'All right, it's time to really put this together.'

"We're not a standard rock band, so there's a different set of parameters in us doing this. We're not going to do the whole album-tour-album-tour thing. But that's OK, 'cause I've done that. Time for something different."

How exactly do you see the band working?

"Well, for a bunch of older guys, it's not really in the cards to be making albums. Besides, is anybody buying albums anymore? I don't think so. So for an exotica band like ours, what we'd really like to do is attract the attention of music supervisors, people who work in film and television and commercials, and see if they can place our music.

"But we'd also like to try to compose for film, as well. For instance, The Wondermints did the Austin Powers theme song - that was Nick - so there's a lot of potential for us. We'd be perfect for period movies.

"Also, I'd like to mount a show in Las Vegas, not in a lounge, but it'd be cool to create a lounge on Mars or somewhere, with dancers and percussions - make a show out of it. Really, I'd like to promote the band like a lifestyle kind of thing, almost like what Brian Setzer did with his orchestra; the idea that people would get dressed up and go to a Las Vegas thing, or Hollywood or wherever - all the trappings that go along with that."

In The Cars, you didn't have just one sound or one approach; there were many, many styles going on in all of the hooks and solos you played. But all of those elements come out fully formed and expanded on this album.

"Well, that's right. I think that's totally true. You could hear examples of twangy, spy-guitar here and there with The Cars, but it all comes out with the Tiki Gods. That's who I am: I love reverb, and I love surf guitar. I once got into a fight with someone after I said, 'I'd rather listen to Dick Dale than Jeff Beck.' [Laughs] The guy wanted to hit me. But I love Jeff Beck, so I have to point that out. But yeah, sure, if you listen to some of the parts I played on Cars records, they point to what I'm doing here."

What do we actually call this? I hear elements of surf, but there's also Ennio Morricone, Henry Mancini -

"It falls under the name 'exotica.' It encompasses them, plus John Barry, Les Baxter - all the classic sounds. Some people call it 'easy listening,' but I don't think we're easy listening at all. [Laughs] We're not really trying to make an old record with the pretty girl on the cover - 'Music To Watch Your Belly Button By.' We're doing a very hip thing made by guys who grew up on rock and pop, The Beatles and the British groups. That stuff doesn't go away. So our take on this music has a rock edge to it that's different from the old records that were made by the jazz guys."

Recording at TomorrowLabs Studios with an SG Standard. The guitar's artwork wss designed by Chris Reccardi, and it was rendered in stones by Robert Kantor.

All one has to do is listen to the Tiki Gods Theme, with those galloping drums, to know that this isn't your dad's music.

"No, no, it's not. It has elements of the old sound, but it still has enough hair and teeth to it to be interesting to someone who likes my guitar playing from the other things I've done."

With The Cars, you always matched the right guitar to the right sound - you have a pretty extensive collection. Did you use a variety of guitars on this album, or were there a couple of go-to-models?

"Not a lot, really. There was one guitar that seemed to get me through the record, and it wasn't one you might imagine. For probably 90 perfect of the record, I used a 1965 ES-335 with a factory Bigsby. For this music, you might think that a single-coil guitar would work, but the 335 sounded great. It could sound twangy and full of 'snap,' but it had more of a robust tone, as well, a lot of meat to it. There's a little bit of Mosrite on the album, but mostly it's the 335.

"There's another cool guitar that I have to point out. The Custom Shop at Gibson made me a guitar that was sort of the same specifications but in Pelham Blue, so I could take it out on the road and not worry about damaging this vintage model.

"Oh, and on some of the gigs we've played, I've been using another guitar that Gibson made for me, but this one's a signature model. It's a Reverse Firebird in Gold Poly Mist, with full-sized humbuckers instead of the minis, and it's got a B3 Bigsby. It also has a switching system much like what's in the new Les Pauls Standards; you can switch the coils, go out of phase, and there's a switch that puts the treble pickup right to the jack with no wiring in-between. It has a tiki god stamp on it and my signature - it's really, really beautiful.

"It should be coming out very soon. I get these crazy ideas for new guitars, and because Gibson wanted to do another one with me, this is what I came up with. What's cool is that it actually works. I like using regular humbuckers. You can get a variety of sounds with them."

There's some beautiful acoustic playing on Sydney's Samba. What are you playing there?

"That's one of the older tracks, with me playing everything, although we might have added some percussion. I'm using an Ovation nylon-string. I recorded that on my Akai about 15 or even 18 years ago. Boy, my daughter [Sydney] must've been a baby back then."

Amp-wise, what did you use?

"It's interesting because I didn't take a purist's approach; I used whatever worked. I used a reissue of a '65 Fender Deluxe Reverb and one of the original Vox Valvetronix amps. I also use a Line 6 Pod Pro, which was great for recording stuff on my own at home. That thing was terrific, because you can call up all of these virtual sounds, and they really do sound as though they're coming from tube amps. I have no problem using new technology. You just go with the tools. And the great thing is, it sounds like me."

Do you like being a band leader? This is the first time you've had your own group, right?

"Sort of. I mean, I did a solo album way back and did a tour. There's good aspects to this, but there is more responsibility, too. It's easy to be the guy on stage right and play clever little hooks and solos, but it's another thing to front a band and to have to communicate with an audience. It's a challenge in that way. Being in The Cars or Creedence, that's not what I did."

You have to brush up on your stage jokes.

"Yeah! [Laughs] I usually have a few, but you can always use more."