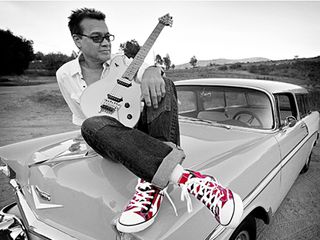 Eddie Van Halen filed a lawsuit against Nike in Los Angeles last Friday, alleging the company used the trademarked striped design from his guitar on their new line of 'Dunk Lows' sneakers.

As seen in the picture below, the Nike shoes feature red, white and black streaks along the midsole.

And as seen in this picture below, Van Halen's chucks, marketed in conjunction with FEA Marketing and available at EVHgear.com, feature the stripes associated with the body of the guitarist's famed 'Frankenstein' guitar. Eddie Van Halen received a 2001 copyright for the guitar's body design.

In their description of the Dunk Low, Nike says the sneakers feature "a combination leather and suede upper with 'mesh-like' detail on the toebox and side panels. The red stitching accents around the Nike swoosh add great contrast, and the graphic details on the midsole really makes this design stand out."

To Eddie Van Halen, they stand out a tad too much.

Court papers allege that Nike infringed on that copyright by using the design on sneakers without "consent, approval or license."

Van Halen claims Nike is causing "irreparable harm and damage" to his signature design. He is seeking general and punitive damages, all profits arising from the sales of Dunk Lows and a permanent injunciton halting production of the Nike shoes.

As a guitarist, Eddie Van Halen is one of the most infuential and emulated players of all time. But nicking his stripes? Apparently, that's where he draws the line.