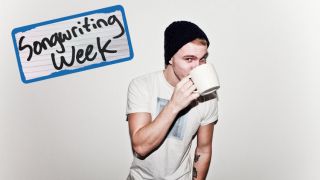 Ed Drewett on writing for other artists: "If I get a shit brief I'll just try to write a good song and hope they like it".

SONGWRITING WEEK: Ed Drewett - you may not know the name, but you will (even if you don't want to admit it) know his tunes.

The 25-year-old is the up-and-coming songwriting tour-de-force behind some of the UK's biggest pop acts. In just a few short years Ed has taken the pop world by storm, writing smash hits for the likes of The Wanted (including the worldwide success that was Glad You Came) and Olly Murs. He's also a co-writer of world conquering boyband One Direction's soon-to-be smash hit Best Song Ever

We got on the phone to Ed just as he stumbled out of another all-day writing session. We wanted to quiz him on penning tunes for the stars, what it takes to go pro and how it feels to see an artist hit big with one of your tracks.

How did you take your first steps to becoming a pro songwriter?

"It all came about by chance. I'd signed a record deal with Virgin and a song I wrote called All Time Low was going to be for me, but my label at the time weren't ready to release it and there was a lot of love coming from The Wanted camp.

"So, the clever thing seemed to be to give it away, otherwise it would have never got heard. That's what happened and it did very well. That put me on the map for songwriting. From then I was asked to write again for The Wanted and that's where Glad You Came came from. That opened doors for me to write for people all over the world."

How does the process of writing for bands and artists work?

"It varies a lot. I like to write with people that can hold their own in a session. Or the other way around is that I like writing on my own or with a producer and seeing what we come up with. I think everyone does it differently. I start with some chords on a piano or guitar and freestyle some melodies over it, then pick my favourite melody then come up with lyrics and concept."

You're only just starting your career, but what lessons have you learned so far?

"There's one very important key to songwriting and that is to know when something's good. That is difficult because most of the time it is a matter of opinion. Once you've had a hit people listen to you more and trust your opinion and in turn you trust your opinion. I now go into songwriting sessions feeling relatively confident that I know what is good and what is not as good. That's how you get songs; you get a song that is good and connects with the public but you need to be the judge of that at first."

Which comes first - the song or the artist? Will you be asked to work with an artist and then craft a song, or do you tend to write and then find an artist that suits the song?

"Sometimes you get drafted in to write. I've just been drafted in to write for the One Direction album. It's a privilege to be asked. A lot of the time I just like writing and working with people to create a song. But a lot of it is a record label asking you to write a song for whoever, and you going in with them in mind and trying to craft something around their act.

"If you're asked to do it then the song goes to the artist; if you're writing for yourself you can keep it for yourself or pitch it to a label."

Is it easy to become possessive of songs? Can it be difficult handing them over to someone else?

"Because I have a set style of writing I tend to mostly write songs that could also suit me. When I wrote Dear Darlin with Olly Murs, I knew it was a song I could easily have for myself. But at the same time, I knew Olly was going to smash it and I had no problem in Olly having it because he's a top bloke and he wrote it with me and I was writing for him. So that's kind of the law, you've got to respect that. Had he not wanted it then that would have been a different story."

Is writing for another artist an art within an art?

"I'm not sure how much of it you can teach. Some of it, the basics you can teach, but there is a lot to it. A lot of it is based on feeling and instinct."

Versatility must be a key attribute for your writing.

"You have to be able to adapt. I have to go into some sessions with a certain artist in mind and then craft a song in certain ways to make it fit. One Direction, you want to go in with a young feel attracting a young age group. I guess it is an art within an art because there's writing a song for yourself and then being able to tailor-make a song - that is more difficult."

How much input do labels have? Will they send you a brief before you start writing for an artist?

"Yeah. You get good briefs and you get really shit briefs. You get some hilarious stuff. Nine times out of ten the brief will consist of, 'We want a smash'. Or it will be like, 'We want something that sounds like Rihanna - We Found Love'. Of course they do - t was a worldwide smash!

"Occasionally a label will give you a fantastic brief that is more like, 'We want something original that is still in the vein of the top ten but that will turn some heads'. You rarely get that. If it is a shit brief I'll just try to write a good song and hope they like it. A lot of the time they do, and if they don't they go and get something that sounds like a club track."

How important is the brief in helping you craft the right song for the right artist?

"There are some basics you can follow. If you get a brief for JLS, they want something dancey so they've already helped you half way. You have to think about where the artist has been and where they're going. With One Direction I've got to think that they're a little bit older now so it won't be as lighthearted as before, but they're still appealing to a similar market. You have to be a good judge of it."

Will there tend to be much going backwards and forwards with the label once the song is finished?

"I like to get it to a place where it is undeniable - then you save yourself a lot of time and hassle. I've been lucky, but you do hear horror stories of it going back and forward between 20 people on an email - 'I like this, change this snare, I don't like this…'. You can get a lot of people involved in a project and it can muddy the waters."

You're an artist in your own right as well as a songwriter, but do you ever kick yourself that you didn't keep a track that has gone on to be a hit for yourself?

"There have been been some great things in my career. Glad You Came was a huge hit around the world - I think it's just gone to Number One in Japan. I'm a very lucky guy and I love what I do. I love my music being heard by other people and I like not necessarily being in the limelight. I get satisfaction from hearing the songs without me being on stage.

"I've always been able to justify giving away a track. People ask why didn't I keep Glad You Came. Well, I wrote it driving in to work for them [The Wanted] so I didn't really have a choice, and I don't know how much of me as an artist that song is. It's a cool track but my music is a little bit different. There's not one song that I think, 'Ah, why didn't I keep that?'."

It must be a fiercely competitive industry to be part of...

Artists who don't write their own music have often been looked at with disdain down the years. Is the job of songwriter for such acts becoming increasingly credible, and more attractive to up-and-coming songwriters?

"I think more pop acts are wanting to get involved with writing. I'm 25 so I don't know much of what people expected or thought of pop artists in the past, but I think there's an understanding that not everyone writes their own songs.

"There's an attractiveness about people who write their own songs or who write for other people. I couldn't imagine being an artist and not writing my own music. Real artists want to be part of every step of their project. Singers, there's a difference - if you're a singer then you sing and look pretty. More artists should get involved [with writing]."

Is it rewarding to work with a band or artist who hasn't done much writing and to end up with a track co-written with them on their album?

"I think it always helps - a lot of artists are put in the sessions to further their songwriting. When you have an artist in there with you the song has a better chance of seeing the light of day."

What would be your number one piece of advice for budding songwriters?

"My outlook is that you're only lucky up to a certain point. I was lucky to meet a producer years ago who took me under his wing. Up to then I was lucky, but from then on I needed to prove myself. You need to practice. The first songs I wrote were basic and cheesy but you grow and learn what needs to change. Put yourself out there, write as much as you can and put yourself in the places where there will be artists and managers. You can't just knock on the doors - you've got to kick them down."