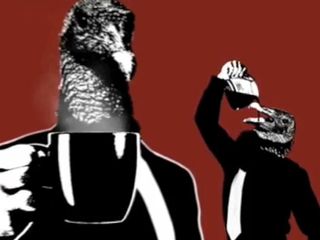 Can you handle the 10-minute video of "Fresh Pots!"?

Sex, drugs and rock 'n' roll - the classic music superstar recipe, right? Well, Dave Grohl has a different kind of monkey on his back. It's coffee he lusts after, and his habit is a powerful one.

In a hilarious video (see below) pulled from the Them Crooked Vultures recording sessions, Grohl is seen demanding "fresh pots!" and banging away like a madman on his drums.

Meanwhile, his bandmates, Josh Homme from Queens Of The Stones Age and Led Zeppelin's John Paul Jones, can only look on in dismay.

"Here's a man that probably has five fresh pots a day," Homme explains in the video. "He's got an insatiable thirst for coffee. If I drank that much coffee, I would cry, 'Decaf!'"

At the clip's conclusion, it is stated that "Two weeks after this video was shot, Dave was rushed to doctor due to the onset of unwanted physical effects caused by too much caffeine. For reals. He was kind of a mess."

The message continues, "Since then he has reduced his intake of the super delicious hot beverage to a healthier level."

By the way, if you want to drive a loved one totally crazy, here's a 10-minute loop of "Fresh Pots!" Watch at your own risk.