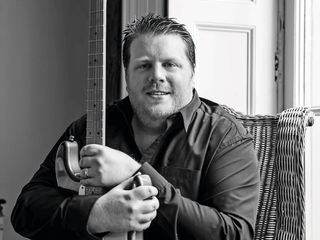 Written on the road. Recorded in the shadow of death. Performed with a pint glass. British bluesman Danny Bryant tells us about the strange birth of his latest long player, Temperature Rising.

Danny Bryant's summer was preceded by a bombshell. It was late March, and the British bandleader was travelling to a show when an email arrived on his wife's mobile phone, confirming the news they had both been dreading. Walter Trout - the US blues veteran who had mentored Bryant since the mid-90s - had been rushed to intensive care in California, and told that without a liver transplant he would be dead within 90 days.

"I knew Walter wasn't well," admits the 34-year-old. "I'd seen that he looked ill on that tour last November, when everyone was a little bit shocked. But that news hit me hard. I love Walter dearly - like a second father.

"I didn't want to lose him. I'll cry at anything, anyway, so I was just trying to hold it together in the van, because at that stage it was all confidential and I wasn't supposed to be telling anyone. I had to go straight from that gig into the studio to record the new album, just trying to get updates the whole time."

A young Danny Bryant with his mentor and friend Walter Trout. © Heather Bryant

Thankfully, there's a happy ending. On 26 May, having battled comas, amnesia and internal bleeding, Trout received his life-saving liver, while the album Danny was recording when he heard the news, Temperature Rising, arrived on 1 September.

"I think it's the best album I've done," he nods. "But once my albums go to press, I don't listen to them anymore."

Temperature Rising is an apt title for a bluesman on the up. While Danny's post-millennial studio work marked him out as a player of precocious soul, you always sensed there was more gas in his creative tank. In 2013, the Hurricane album confirmed it, with the guitarist nudging into singer-songwriter waters without shedding his blues-rock roots.

Now, a year later, Temperature Rising feels like the sequel, sharing the same producer (Richard Hammerton), studio (the isolated Goodmerry Farm in Cornwall) and sense of urgency. "Hurricane raised my profile a bit," says Danny, "so we wanted to keep that going and have a quick turnaround."

Temperature Rising was tracked in two weeks, remembers Danny, but had been mapped meticulously to avoid blues auto-pilot.

"That's important to me. I'm obsessed with the blues, and I've probably got every book and DVD about it you can possibly imagine. But I have other influences, too, and I'm not interested in making an album of 12-bar blues. I just have to make sure I don't go completely the other bloody way and make a Westlife album. Not that I have any desire to. It's just about striking a balance, really."

Likewise, on guitar, the new songs are a fusion of craft and off-the-cuff impulse.

"Best Of Me was always going to be the album opener, and it's a bit different for me," explains Danny.

"That song started off with a clean, funky, Nile Rodgers sort of riff underneath, then a gritty fuzz guitar over the top, so there's a lot going on with the rhythm. On Together Through Life, I wanted a big emotional solo. I'm not a technical player, so my solos are always pure emotion. We made all the solos first- or second-take, so it kept that raw edge."

Danny even plays slide on Take Me Higher - albeit somewhat reluctantly. "That was hard," he grins. "I said, 'Look, I can't play slide guitar...' but Richard just can't get it into his head. He makes me anyway. That's pretty much the top of my abilities with slide. We got into the studio and I realised that I'd left my slide at home - so I'm actually using a pint glass that I found lying around!"

The rest of Danny's studio set-up was less makeshift. "My Fret-King Corona DBR model is out now," he reminds us. "It's very weird to have a signature model. I actually went into London, just to see it in the shops. Trev Wilkinson has just built everything I want into one guitar.

"In terms of feel, it's got a big V-shape neck profile. It has a bridge P-90 that rolls down into a true single coil, plus a single coil, and a humbucker that becomes the neck single coil. I took a BB King Lucille and a Les Paul Goldtop into the studio, too, but for me, the Fret-King is just as good.

"When I first met Trev back in 2005, I'd just spent a few thousand pounds on a Custom Shop Strat, but since he built me my first Fret-Kings, it's been under the bed. My wife keeps saying to me, 'Why don't you sell that bloody thing? You don't even take it out of the case...!'

"Then I had my two Marshall TSL-100 heads, which is what I use live," continues Danny, "along with a Marshall Silver Jubilee and a Fender Super Reverb '65 'blackface' reissue. They all went through a 4x12 closed-back cab: we isolated them in another room, then turned them up.

"In terms of pedals, I just had a Uni-Vibe, a Cry Baby wah and my tuner. I remember seeing Buddy Guy once at a festival. He'd been out the back drinking brandy, and he came on and his tech just plugged his guitar into an amp that had been sat there all day. He turned it right up - and it was the best tone I'd ever heard in my life. No pedals or anything. So I thought, 'Well, there's a good lesson.' Having 20 pedals isn't for me. I want to be able to play all of these songs live!"

That's understandable. While it's potent through a stereo, you suspect that Temperature Rising will sound even better from a venue's security barrier. And now - having fronted the Walter Trout Band on a US tribute tour through the summer - Danny is contemplating a winter schedule that would make lesser road-warriors quake.

"I'm flying to China for a week of shows," he calculates. "Then I go for two weeks to Poland, the Czech Republic and Europe. Then I come home and do Bluesfest at the Albert Hall. Then I play in Holland. Then I go for a month to Germany. And after that, I'm dead, I think...!"

Danny Bryant's Temperature Rising is out now on Jazzhaus Records