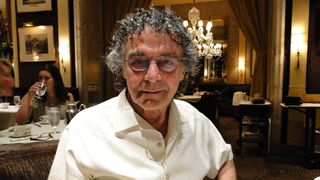 Over a breakfast of oatmeal and berries in New York City's tony Carlyle Hotel, Crazy Horse bassist Billy Talbot explains how Neil Young has rubbed off on him over the years. "It sounds elementary, but Neil has taught me that spirit is everything," he says. "You can try to record something and refine and chip away and polish it - whatever - but unless you've got the juice, the good stuff, right away, you don't have anything. It's easy to kill spirit - most people do."

And spirit sometimes takes time to fan out, as evidenced by the running times of the songs on Talbot's second album with The Billy Talbot Band: Most of the tracks clock in at eight minutes or longer, and the epic title cut, On The Road To Spearfish - by turns exorcism and benediction, bursting with gloriously unhinged guitar outbursts - is a 13-minute road trip.

"I feel blessed and so lucky that the record came out exactly the way I wanted," Talbot says, whose first album with his own band was 2004's Alive In The Spirit World. "There's mistakes here and there, things other people would remove, but that's part of the way I work. If everything else sounds great and the vibe is there, all of that other stuff just adds to the overall feeling."

Talbot handled most of the guitar parts on the new album and turned over bass duties to Tommy Carns (the rest of the band includes guitarist Matt Piucci; Erik Pearson onhorns, banjo, lap steel; Mark Hanley, lap steel, mandolin and guitar; and Stephan Junca on drums), but he's going to be back on the four-string all summer long as Crazy Horse traverses Europe on their Alchemy tour. In the following Q&A, Talbot talks about the importance of musical cosmic connections, why long songs rule and how nobody can make a guitar sound like Neil Young.

I'm going to take a wild guess and say that you don't make big, elaborate demos.

"How about no demos? [Laughs] I don't do demos. Demos, to me, are recordings, so once you record a song, whether you call it a demo or whatever, the cherry is off the tree. I have a way of doing it, and it worked really well this last time. In Pescadero, California, where I live - I also live in South Dakota - they have a music festival once a year. It's very small, just a few guys with tents. With my band, we played On The Road To Spearfish, and that was the rehearsal for the song. It was done.

"Other songs I played with the band about a month before we recorded them. That's really the way you do it; you don't beat them into the ground and overdub part after part, doing the song piece by piece. I know other people do things that way, but it doesn't work for me. I guide the guys, but they're so good that I don't have to tell them much. With Cold Wind, we played it once, and halfway through, I said, 'That's it. That's the sound. Don't forget what you're doing.'"

The songs aren't short. But hey, I remember Drifting Back from Crazy Horse's Psychedelic Pill - that song's half an hour!

"Yeah, and it works. Actually, with Drifting Back, that recording was the first time we ever played it. Neil just said, 'Here's these chords,' and we went. Sometimes he doesn't even say anything; he just changes chords and we have to grab on to it. There's nothing wrong with long songs. They never feel long to me. They're only long if you're not doing something interesting, and if you're not doing something interesting, you should stop."

The song, On The Road To Spearfish, has some pretty intense guitar drama - like what we sometimes hear with Crazy Horse.

"Sure, that's there. There's two guitars, bass, drums, horns, organ, synthesizer, all of it played live. I said to Matt, 'I really like what we did on the guitars when we played the song live,' so that stayed. The drama is us going on a journey. We got it on the first take.

"The Crazy Horse philosophy carries over because it's us - it's what we do. I've been in that band from the very beginning. The Rockets would jam on the same two chords for two hours, and there's a lot of beauty in doing that. When Neil plucked us out of The Rockets and we went into the studio, we did the same thing on Down By The River and Cowgirl In The Sand. We jammed on two chords and didn't stop. But we knew how to rise and fall and build the feel. That's what Neil always wanted."

What does Neil say he likes about what you do? Does he ever verbalize it?

"The other day, he said to us in London - we didn't think it was a good show - so he said, 'It's the cosmic thing. We either connect, and it really happens, or it doesn't.' We had just done 10 shows, and we thought that eight were great and two were just OK. But the audience loved all of them - to them, it was their first show.

"With Neil, it's all about a cosmic connection. We feel everything together. The first time we played together was Down By The River, and it connected cosmically. When we have that thing, it's done without talking; it's all about us feeling it together, and you can't force it. None of it is worked out; it's improvisation, for the most part. We're tuned it with one another, and it happens.

"Cinnamon Girl is different: It's more of a structured song. When the cosmic thing comes in, it's after we get through the first two verses, and it goes into the instrumental section. The instrumental has to have the feel for it to really sparkle. Some nights we're all connecting, and it's magical."

You can hear that on your song Miller Drive. There's almost a bit of a Doors-like trance going on there.

"That was a complete and utter improvisation. None of the guys, or me, had ever heard it or thought it before. We were tuning in for God And Me, which is the next song, and this song about a brothel came out. I started singing, and everybody joined in, and the stream of consciousness happened. Nobody chickened out. The engineer had the tapes rolling, and we played God And Me after that. As far as I was concerned, it was just a warm-up. We didn't even know the song was there for two months."

What were your main guitars on this record?

"I have a '66 Fender Strat that I used on most of the songs, but On The Road To Spearfish, I used a '68 Les Paul. I have an old Fender Tremolux, which is a Deluxe with tremolo. I have an old Martin D-28 from 1954, and I used that on Big Rain. I only use instruments that have feel and soul. If a guitar doesn't deliver a vibe, I don't want to play it."

What would Neil say to you if you wanted to borrow Old Black for a recording?

[Laughs] "I wouldn't ask. It's just too much. He might consent to it, but I think it would be too much of an imposition. I strummed it a few times, but that's about it. It's a special guitar, as you know, and it's Neil's sound. But it's also the way he plays that opens that guitar up. He's great. Nobody can get a sound like Neil. If I played Old Black, I might sound good, but I wouldn't sound like Neil Young. That's his - he owns it. He owns the sound."