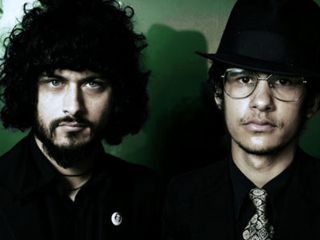 Cedric Bixler-Zavala and Omar Rodriguez-Lopez are The Mars Volta...for now

Could At The Drive-In, that much-loved post-hardcore/quasi-progressive band that called it a day way too soon, be reuniting? Nobody's saying for sure, but singer Cedric Bixler-Zavala of The Mars Volta is dropping hints.

Bixler-Zavala, who has taken responsibility for the split, saying that the band was holding him back creatively, went off with ATDI guitarist Omar Rodriguez-Lopez and formed The Mars Volta.

And while they're about to drop their fifth studio album, Octahedron, on 23 June, the frontman indicates that he's feeling nostaglic for the old days and the old gang.

"We've been making amends with a lot of the members and having some really good talks with them," Bixler-Zavala told Drowned In Sound. "And we've been trying to get our financial business in order because a lot of people have been ripping off that band really badly...as far as the business side goes.

"I wouldn't mind it," he continued. "You know, it might happen. We just have to iron out a lot of personal things. A lot of it we've dealt with already and I've apologized for a lot of things I've said and the way it ended. We'll see what happens."

Still, ATDI fans shouldn't expect fast action on the reunion front. The Mars Volta are about to hit the road to support Octahedron, and Bixler-Zavala is more than pumped with the guys he's currently playing with.

"Being around the people in the band right now just excites me," he said. "Plus, to have as much time off as we've had from it...it's a good break to remind you what you love doing. I love it and I'll always love it. It's the one outlet I have that won't get me arrested or get me in trouble. I can get away with it. I don't know if I could collaborate with many other people."

In other words, we could see you back At The Drive-In. Just not soon.