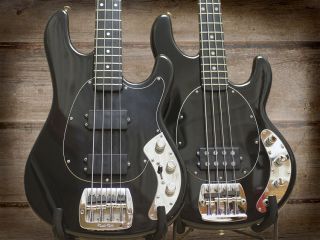 The Cutlass I and II were Music Man's attempt to join in the graphite neck revolution by teaming up with Modulus Graphite to produce two short-lived models.

Earliest examples used existing body stock (some going back to 1979) and three-bolt neck plates, although these were soon changed to rectangular 4-bolt plates. The 3-bolt version also had through-body stringing whereas the 4-bolt was fitted with a top load bridge unit.

The Cutlass I was essentially a Stingray and the Cutlass II a Sabre, each using those distinctive body shapes and hardware, although the Cutlass II did not retain the exposed pole pieces as seen on the Sabre's twin pickups and also offered a simplified circuit too.

The Cutlass may have been all about the graphite neck but it was obviously not that popular at the time as very few units were actually built. They are pretty special, however, as Dave Swift (owner of these two basses) explains,

"I had a Cutlass I that I bought from a shop in Birmingham back in the 80s. I believe it was one of the first Cutlass basses to turn up in England, if not the first, and most of them were all black, but mine had a beautiful natural ash body. Unfortunately I sold it! I now have a Cutlass I and II, both black, and even though these are also very rare and collectible, I wish I still had my original natural one."

Our sincere thanks go to Dave Swift for his input and to Lars Mullen for the pictures.