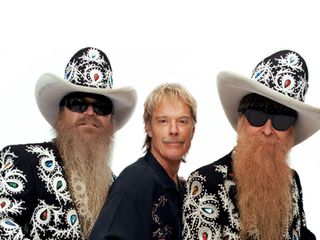 The speculation is that Rubin will return ZZ Top to their rawer roots. According to frontman Billy F Gibbons: "Could be. Rick and I have been friends for a couple of decades now. And we both like a lot of the same things. And mostly it is that rootsy kind of sense of realism. That's his genius."

ZZ Top were one of the biggest American bands of the '80s with their Eliminator, Afterburner and Recycler albums with Eliminator selling 10 million copies alone. The three albums all had a distinct sequencer-driven flavour but the trio fell out of favour in the '90s with a series of lacklustre albums. Most long-standing fans would welcome a return to the rougher, blues-based songs of '70 albums such as Tres Hombres and Tejas.

That said, ZZ Top recently featured as guests on the finale of American Idol - a comedown for a band led by a man (Gibbons) that Jimi Hendrix called his "favourite guitarist".

According to ZZ Top's manager Carl Stubner, "We thought this was a great brand that was kind of dusty. My goal was to polish it and do certain things they hadn't done before."

Rubin began producer life as a hip-hop impressario with Def Jam records and has recently guided Red Hot Chili Peppers and Metallica back to form. He's nevertheless become best known in for reviving the careers of American icons Johnny Cash and Neil Diamond.

Just as importantly for ZZ Top, Rubin has a huge beard. Sounds like a partnership that's going to work.