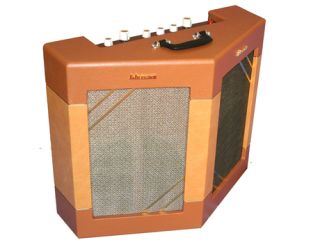 A faithful recreation of the eccentric looking classic.

The Watkins Dominator: A faithful recreation of the eccentric looking classic.

Be prepared to experience an 'I want one of those!' moment. British Amplifiers has announced that it is to produce a limited reissue of the '50s classic Watkins Dominator amplifier.

The oh-so-retro-sexy Dominator V Front guitar amp was one of the classic British amp designs of the '50s and '60s with its nicely odd art-deco looks and valve tube innards.

British Amplifiers will be producing 100 faithful recreations of the Mk1 series 2 model of the amp to mark the 50th anniversary of the original's release. Each of these brand new valve tube amps will use the original Watkins 17 watt push/pull circuit. All will be built to original specifications, completed by golden livery and all the little cosmetic touches of the original Dominator series.

Not only that but each of the reissued amps will be signed by creator Charlie Watkins and will come with a personally addressed letter of authenticity.

Each amp runs at a price of £1399 with an optional upgrade of 2 x 15W Alnico Electro Acoustic speakers for an extra £117.

Sound tempting? Then head over to British Amplifiers for more info. In the meantime we'll be frantically composing letters to our mothers asking if we can have our Christmas present six months early this year…