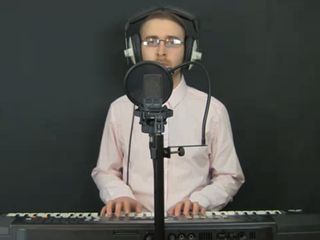 Brett Domino: from the internet to the Top 40.

OK, the headline might be just a little wide of the mark, but internet sensation and MusicRadar contributor Brett Domino has scored quite a coup this week by achieving a UK singles chart position that's higher not only than that of The Beatles, but also new releases from Kylie Minogue, Gorillaz and Usher.

Domino's Gillian McKeith, an ode to the behaviour of the 'Holistic Nutritionist' of the same name during her stint on ITV's I'm A Celebrity, Get Me Out Of Here, landed in the Top 40 at number 29, with The Beatles' newly-digitised Let It Be trailing it at number 38.

Usher, Gorillaz and Kylie, meanwhile, had new entries at 33, 37 and 40 respectively.

Speaking to MusicRadar about the feat, which was made possible by his song's inclusion in the iTunes Music Store, Domino said: "It's very surreal to be sitting above The Beatles in the real-life charts. Especially with a song that I hastily cobbled together last Monday - it doesn't seem quite right somehow!

"[It's] great though, obviously. I just hope Gillian doesn't take offence now she's out of the jungle!"

What, then, are the chances of Gillian McKeith charting even higher in next week's Top 40? At the time of writing, the song is at 21 in the iTunes chart, so it could happen...