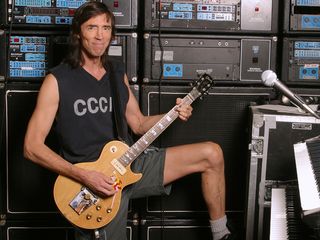 More than a lawsuit?

Boston guitarist and mastermind Tom Scholz has sent a cease-and-desist letter to a man who has run not one but two fansites devoted to the band, asking him to remove defamatory statements made against him...or else.

"You have caused a multitude of defamatory statements to be published about the Scholzes on your website," Scholz's attorney Lawrence Green states in a letter to George Gouldsmith. "These statements have all been made falsely and maliciously and otherwise with reckless disregard to the truth."

The problems all started in 2007, when Gouldsmith, who had started a Yahoo message board two years earlier called Boston Rocks, was forced to shut down the site after members began posting messages that Scholz took exception to.

"The posts crossed the line in so many ways," Boston's publicist Gail Parenteau told MusicRadar. "We're talking about spreading falsehoods about Tom and his wife, things that were very hurtful."

In an apparent effort to appease Scholz, Gouldsmith launched a new site called CoolTheEngines, named after one of the band's songs, and encouraged fans to be on good behavior. Before long, however, the same badmouthing was rampant - much of it aimed at Scholz for his alleged treatment of Boston's late singer Brad Delp.

"George posted things on the website that were patently untrue," says Parenteau. "On a variety of subjects, things which he had no privileged information about, he let them go through. We asked him on numerous occasions to retract certain posts."

Parenteau states that Tom Scholz is not anti-fansite. "Since the Internet first started, Tom has had a website and had no problem with fans creating their own sites." But she points out that the guitarist draws the line at "malicious untruths."

And unless Gouldsmith cans those 'untruths' pronto, he could be paying through the nose: In the letter sent to him from Green, the attorney said that he'd seek "substantial monetary damages" unless all references to Scholz and his wife were removed.

In other words, it's legal Foreplay. But things could get Smokin' very soon.