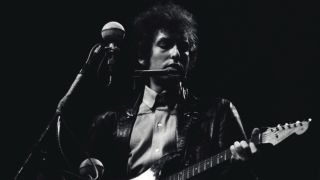 Over 50 years since Bob Dylan went electric at the Newport Folk Festival, the Fender Stratocaster that fuelled the furore has returned to Newport.

Jim Irsay, owner of NFL's Indianapolis Colts, snapped the guitar up at auction in 2013 for a record-breaking $965,000 after it went undiscovered for several decades, before Chris McKinney - who curates Irsay's collection of rare guitars - brought the Strat to the festival on Friday 24 July 2015 as carry-on luggage.

"[Dylan's guitar] is such an important part of musical history, and Dylan was our generation's Shakespeare, so it's our way to give back and share," Irsay said of the loan.

The guitar, which was originally played at the festival on 25 July 1965, provoked controversy when Dylan opened his set brandishing an electric, rather than the acoustic with which he had long been associated.