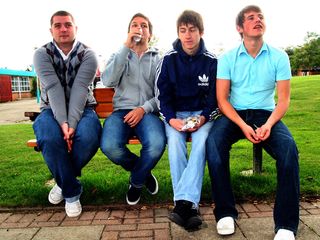 They might look hard up, but Arctic Monkeys have done pretty well from their music

Whilst reading a recent Guardian Unlimited article by songwriter Helienne Lindvall, I was shocked to discover that venues are now routinely taking a cut of acts' merchandise sales just for providing the 'privilege' of letting the band peddle their wares on the venue's premises.

Standing firmly on the side of the struggling artist, I was appalled at this cheap cash-grabbing tactic on the part of venue managers - but if it's becoming the norm then I find it difficult to imagine anything being done to stop them. It got me thinking, though: what exactly can up-and-coming acts do to make money from their craft?

With the recent decline in physical copy sales - and with digital sales not nearly filling the gap - musicians have been getting used to the idea that they'll have to find (and indeed rely on) alternate income streams. Making money from touring and merchandise is the obvious option, but this is none too easy.

For those unaware, venues pay small acts an abysmal amount of money; in fact, some venues even charge a hiring fee. You might get a cut of ticket sales if you're lucky, but even then you need to ensure you get a decent-sized crowd - and venue promoters often do no more than to put up a few shoddy posters.

"Despite the 'power to the artist' attitude that the Myspace revolution has inspired, record labels still maintain a huge amount of influence"

It's not just promoters and venues that are putting the squeeze on artists either. Record labels, panicking in wake of online piracy, are becoming increasingly keen on so-called 'package' deals where the label has a financial interest in everything an artist does - not just their recordings. Blown your nose and sold the hanky on eBay? Send a slice of the profit to Guy Hands.

You don't have to sign one of these deals of course, but despite the 'power to the artist' attitude that the Myspace revolution has inspired, record labels still maintain a huge amount of influence, and small acts often see any pitiful record deal offered as their one shot at the big time.

Major labels are also encouraging artists to sign a publishing deal with them too: and it's bad news if your publisher - traditionally seen as more 'onside' than labels - is part of the same company as the record company.

It's not all live, merch and record sales though; money from synchronisation (ad, TV and film music), for example, can provide a much needed lifeline. Indeed, some acts do very well from ad music - it seems you can't watch TV for 30 seconds without seeing a phone ad accompanied by a cutesy-wootsy singer-songwriter, or a trailer for a 'gritty' BBC drama with the intro to Muse's Time Is Running Out playing over the top - but it's not for everyone. The money you make depends on how favourable a publishing deal you have, and some acts (Radiohead and The Beatles included) are uncomfortable with using their music to sell anything.

But why are artists being wrung for all they're worth? Has the current culture of 'doing it yourself' been detrimental to the artist? After all, why should a venue promoter put hard work into promoting an event when the artist does it anyway? Record labels, major or indie, want their artists to be fully self-sufficient even before any record deal, because they're losing money and can't afford to splash out on small artists and take risks as they once did.

It is a sad truth that artists have to scramble for ways to glean every last penny they can from their music, but if they want to commit themselves to their art full-time rather than get normal job then it's the only choice they have. It's ironic, in this day of the minimum wage and improving rights for workers, that music makers are finding things harder and feeling the pinch. Let's hope then that something is done about it. Artists and bands work exceptionally hard, and deserve, at least, to be able to make a living.