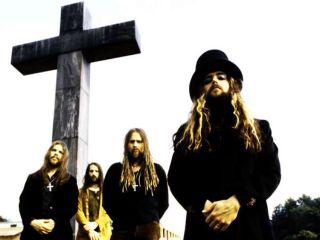 Return of the dinosaurs?

It's easy to fear prog rock. The grueling, self-absorbed solos, the goofy, operatic singing about space ships and such things - hell, just the name 'prog rock' scares the bejeesus out of most folks. But Bigelf, a bunch of mangy looking mugs - from Los Angeles of all places! - are giving new millenium prog a good name. They're a start, at least.

Bigelf is a bad name, but the racket they make casts an ominous, magical spell. At first glance, one would hardly guess they hail from LA: The early Sabbath visual trappings, photographs set in graveyards featuring the all-important towering crucifixes (though these aren't upside-down, a neat switch), with a touch of Yes fashion (capes) thrown in for good measure - either these guys are from the Midwest, fresh from a mind-bending, three-day Devil-worshipping kegger, or they're from Birmingham, England, following in the footsteps of the grand masters.

But what makes them so visually uncool drawls you in. They even call themselves 'the evil Beatles,' which is insanely cool! True or not, it's just a great line, a bit of demented genius even.

Cheat The Gallows - the new album

Bigelf aren't a new outfit: the foursome (Damon Fox, vocals/keyboards; Ace Mark, guitar; Duffy Snowhill, bass; and Froth, drums) have been 'schrooming around LA since '95 and have put out a number of EPs and albums.

Which just proves that sometimes even music journalists, deluged with the latest Franz Ferdinand and Fall Out Boy clones, can be slow to catch on. But we eventually come around, especially when presented with an album as gloriously over the top and whacked-out as Cheat The Gallows.

Pink Floyd, ELO, Queen the artier periods of The Beatles and David Bowie - they're all there, with an AC/DC-charged power chord attack and Fox's more articulated take on Ozzy Osbourne-esque vocals.

Check out the video to Money, It's Pure Evil, which whirpools all of the above with considerable gusto.

Fox scores big-time points for balls for playing two keyboards at once - the ultimate Keith Emerson/Rick Wakeman behold-my-awesomeness move. And if anybody can meticulously nail David Gilmour's Wall-era, crying, tubey guitar tone, it's Mark, although he does so with an SG (in the clip at least).

The second coming of dinosaurs

The rest of Cheat The Gallows bears out that Bigelf aren't a throwback; they're a comeback. Call them dinosaurs and they'd laugh in your face and say, "Hey, the dinosaurs had a damn good run."

On audacious tracks like Superstar, Black Ball and the organ-doused The Evils Of Rock & Roll, Bigelf turn songwriting convention on its ear: Most bands score when they start with a hot tune first and then apply only the barest, most necessary production elements. Bigelf dig out the kitchen sink and the attitude and then write their songs around them.

And it works, gloriously.