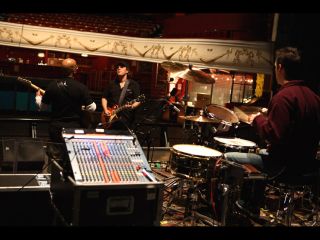 Now then, I´ve never sterilised an elephant, but I doubt whether it´d be that in tune. I´ve no doubt at all, however, that it may well be that loud.

Once again - in a theme that´s likely to become a recurring one here - I´m counting my lucky stars. I promise I´m not gloating. Many a hard-nose journo wouldn´t flinch. After all, it´s a bit unprofessional to be stoked just to be on stage with a guitar hero, isn´t it?

Well allow me this indulgence (and come inside these brackets where I can whisper. (No, closer still… whisper now…)) Bollocks! I don´t care what anyone says, no matter how many stars you meet, no matter how many guitar players show you what they know first hand, I defy anyone who truly has six-string DNA to not be just a little bit awestruck by experiences like this.

Joe comes out. Plugs in the ´59 Historic Series Les Paul. There´s a Marshall Silver Jubilee pumping constantly, then and any one of a Van Weelden Twinkle Land, Two Rock Custom Reverb Signature or a Category 5 Plexi clone switched in for “colour” as Dave Pate tells me.

I´m floating. Just for a minute. But I´m up there alright.

Okay, more soberly, and back to business. The reason we´re here is because that a) Joe Bonamassa is just about the most exciting blues prospect we´ve seen since Stevie Ray; and b) Guitarist has been invited to spend a couple of days to get to know him a little better. You can read the April issue of the mag - on sale 13 March - to get the full story.

In the meantime, Check out MusicRadar's exclusive gear walk-through video with Joe Bonamassa.