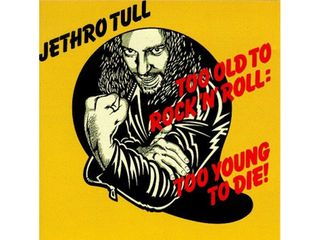 Your age isn't holding you back. It's your mouth

My friend Chris is a fantastic drummer. When we first met, some 20-odd years ago, I knew he had the goods - an assured right foot on the bass pedal and a Ringo-like sensibility on the toms. Plus, he possessed an exuberant range and an ear for detail that rivaled the pros.

Name a style of music and Chris could make it sing, effortlessly. Rock 'n' roll? He rocks, he rolls. R&B? Groove for days. Jazz? Cool or otherwise, we're talkin' chops up the butt. But heavy metal, particularly the NWOBHM popularized by groups like Judas Priest and Def Leppard, was his specialty, and Chris brought a good-natured swing to his speed that never failed to impress. Why he never made it was something I could never quite figure out.

Actually, that's not really true. As towering a musician as Chris could be, he never mastered the art of people. That self-edit function that most people have tucked in their brains, Chris doesn't have that. You know what I mean: You meet somebody for the first time and you tell yourself not to mention the enormous pimple on the guy's nose? Chris would always say something like "Wow, man, that pimple must hurt like a bitch." Not making friends and alienating people were Chris's side businesses, and business was always brisk. Meanwhile, his full-time gig, that one that paid the bills, was working at a CPA firm. Chris didn't have a head for people, but he knew his numbers. It's no wonder he could switch time signatures as quick as others could underwear.

Like all of us, Chris is getting up there. He turned 38 a few months ago, a milestone that precipitated a phone call in which he informed me that he was thinking of hanging up his sticks for good. "Why should I keep hoping I can make money as a musician?" Chris asked. "I'm too old for this. Everybody I know has either made it or moved on. I go on auditions and there's dudes in their 20s. If I was going to make it, I would have made it by now." After a pep-talk from me, Chris reversed his position and vowed to keep on pounding the skins.

All Chris had ever wanted was to play the drums for money. Fame and real fortune are nice ideas, and Chris fantasized about them long and hard for many years. But making a steady income from his obvious skills should have been within Chris's grasp. Unfortunately, things don't always work out that way.

A week ago, Chris responded to an ad to play drums in a cover band that was going to enjoy a summer residency at the Jersey shore. It seemed like a sweet deal: four nights a week, performing classic rock tunes and a smattering of current hits. The pay was $1,200 a week. "I can do this gig," Chris said, to which I agreed enthusiastically.

I accompanied Chris to the audition. The band members were all in their late 20s and early 30s, and it seemed as though the drummers auditioning were all of equal age. Chris sat down at his drums and breezed through some tunes with his normal accomplished ease. He's got this in the bag, I thought. After the audition was over, the band members asked Chris about his availability. But instead of saying something like "I'm ready when you are," Chris started to list the dates and conditions that he could play. Then he rattled off his ideas for cover tunes and proceeded to trash some of the newer songs the band was intent on performing. Oh, no, I thought. He's doing it again. Driving home, I went off on Chris, telling him in no uncertain terms that he had the job in his hands and blew it, the same way he harpooned every other situation he could have had. "Why don't you tell me the truth?" Chris said. "That I'm too old." All I could do was shake my head.

Last night, Chris called me to tell me the expected news that the band had decided to go with another drummer. "I can't believe they picked somebody over me," Chris fumed. "The guy's 46. He can't possibly rock as good as me!"

Maybe not, Chris. But he knows when to keep his mouth shut and drum. And he'll be doing so for $1,200 a week this summer while you're sitting at your desk. Getting older. Not drumming.