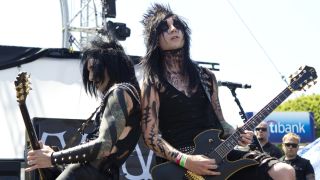 The '70s had Alice Cooper and KISS. The '80s had Motley Crue. By the mid-'90s, the impact of grunge, with its emphasis on unvarnished realism popularized by bands such as Alice In Chains and Nirvana, had all but killed off rock theatricality, but in 2007, an unlikely quintet from Cincinnati, Ohio, called Black Veil Brides responded to the roar of the greasepaint, combining an over-the-top metal/goth visual aesthetic with a sonic overload that straddled the metalcore, screamo and speed metal genres.

After releasing two EPs (2007's Sex & Hollywood and 2008's Never Give In) and two full-length albums (2010's We Stitch These Wounds and 2011's Set The World On Fire), the relocated-to-LA Brides (guitarists Jake Pitts and Jinxx, vocalist Andy Biersack, bassist Ashley Purdy and drummer Christian "CC" Coma) sit atop the heavy metal roost, and for their just-released 2013 set, Wretched And Divine: The Story Of The Wild Ones, they went for broke: the new album is an honest-to-goodness concept record, a 19-track rock opera, no less, accompanied by a feature film, Legion Of The Black - the picture recently aired on pay-per-view and is now available on DVD.

Recording Wretched And Divine presented a few challenge for Pitts and Jinxx - the guitarists wrote the album's music to Biersack's melodies and lyrical concepts rather than the other way around - and we sat down with them recently to talk about the record-making process, the evolution of the band's makeup attire and to find out why they're so jazzed about the newest addition to their signal chains.

Although you have refined the makeup and your stage clothes, do foresee a time when you might do away with it altogether? Vince Neil wears jeans on stage nowadays.

Jinxx: "That's true, he does. For us, I don't think so. We used to go on stage in full makeup and body paint and studded leather. On this record cycle, we look more like a biker gang. We're reducing the amount of studs and makeup. I think there will always be an element of dressing up in our band. It's rock 'n' roll.

"For too long, the visual has been lost in rock music. I think it's lazy to go on stage in jeans and your shorts. When I was a kid and I'd watch MTV, I'd see Motley Crue and KISS - they looked like rock stars. People want rock bands to look like stars."

Jake Pitts: "It was tiring doing the black paint, and it probably wasn't very good for our skin. That paint was acrylic or latex based, so it would get all rubbery almost. During hot, sweaty shows, it would melt. It never ruined anything, but it did make quite a mess."

The new is a rock opera. Some people will hear that and go, 'Cool - The Who's Tommy, The Wall by Pink Floyd.' But others will say, 'Rock opera? Sounds pretentious.' Did the possible latter reaction worry you at all?

Jinxx: "I've always fancied the idea of doing a concept album. Those were some of my favorite albums growing up, things like The Wall. I would listen to that record and watch the movie over and over. I like the idea of a record telling a story. Sure, it might seem pretentious to some people, but we're artists, and we're always looking to better ourselves."

Pitts: "Initially, our main worry was whether people would understand it or not. When we decided to do the whole movie thing and have a visual representation of the story, we relaxed and felt that we'd get the message across. When we get an idea, we basically stick to our guns and go for it."

What made you go with John Feldman as producer?

Pitts: "We had talks with several different producers, and we started the album with somebody else. We had done one song with John, and the vibe was much better with him. Not everybody agreed on everything all the time, but that happens. When it came down to the final product, we felt like he truly was the best guy to have gone with."

Before the album's release, John described it as being more punk rock, calling it "a cross between Social Distortion and Metallica." Do you agree?

Pitts: "I don't know. I'm probably the biggest metalhead in the band, so I'd be more on the Metallica side of that. I don't really listen to too much punk."

Jinxx: "To me, the album is more punk in the lyrical sense or the attitude sense. Musically, it's classic metal. Jake and I write the music, and we grew up listening to Metallica, not Social Distortion. I was a classically trained violinist. You hear all the interludes on the record - that's me."

Does classical training come through in your guitar playing in any ways you can pinpoint?

Jinxx: "Oh, absolutely. Sometimes there will be certain bridges or riffs that I might contribute to a song, and maybe you can hear they're borrowed from Bach. I think you can hear that through our music."

Was the album fairly easy to make? The way you went about recording it was different from your other records.

Jinxx: "That's true. It wasn't entirely easy. We had to go outside our comfort zones a bit. On previous records, Jake and I would write all the music first and demo it, and then Andy would compose melodies. This time, we'd start with a lyric or vocal idea, and then we'd do the music to fit."

Pitts: "It was both easier and harder. Yeah, the way that we wrote the music was different for us - and so that was hard at first. It was cool to try it a new way and challenge ourselves. Once we got going, it was great to track guitars at my place while they did bass and drums in the studio. Jinxx and I were able to get a lot done in a shorter amount of time."

There's a very pronounced electronic underpinning to the song In The End. Are either of you big electronic music fans?

Jinxx: "That's something John influenced in our sound. It's kind of a new thing for us."

Jake, there are loads of harmonized guitar parts on that song - the whole album, really. Do you actually double and triple your parts?

Pitts: "I do. On leads, I'll record parts and pan them left and right. For choruses, there can be three and four guitars or even more going on - a main lead, an octave part and a bunch of rhythms. I think I'm pretty accurate. Sometimes it's difficult to match things up, but I find I can usually nail 'em pretty spot-on."

Parts of CC's drumming, like on the song I Am Bulletproof, are blindingly fast. Jinxx, as a rhythm guitarist, are you following him, or is he locking in with you?

Jinxx: "You know, I mesh really well with him. Actually, I prefer playing rhythm parts to songs like that. I think that CC and I are a real driving force together. Sometimes I have to lock in with him and vice versa."

"Sometimes there will be certain bridges or riffs that I might contribute to a song," says Jinxx, "and maybe you can hear they're borrowed from Bach." © Melanie LiCausi

Jake, there's a bit of a ray-gun effect in I Am Bulletproof. Is Steve Stevens a big influence?

Pitts: "The dive bomb, yeah. I've heard Steve, and he's a great player, but I don't know if he's had a major impact on playing. John kind of added that after-the-fact. It was more of a production thing. I try to come up with my own things and use my style. If I had to point to one guy as being an influence, it would be Paul Gilbert."

There's a bit of a hip-hop beat to New Year's Day. How did that come about?

Jinxx: "Again, that was Feldman's influence. We were in pre-production with the song, and that kind of rhythm was introduced to us. We put our parts in later."

Let's talk about the guitars you guys are using. Now, you both have signature BC Rich models.

Jinxx: "Yeah, I have a signature Pro X Bich. It's primarily what I use. I have a Floyd Rose bridge on it; it's got a 24-fret neck, which feels nice; and the pickup in the bridge is an EMG 81. We've recently started using Sustainiac pickups, so I have that in the neck. It's pretty straight-up."

Pitts: "I've been with BC Rich for a while, too. I play mainly the Mockingbirds, and I have my own signature Pro X. I play one of those and an ST model with a Sustainiac in the neck position. We got those guitars halfway through the recording process, so I was looking for ways to use them.

"I want my signature guitars to have the Sustainiac. They're working on that right now. I had an 81/81 setup on the guitar, but soon it'll be the Sustainiac in the neck. It's a pretty simple guitar."

The two of you are big fans of Kemper Profiling amps, as well.

Jinxx: "That's right. We use them both live and in the studio. They're terrific. Everything we do in the studio, all the things we recorded at Jake's house, we're able to reproduce them on stage."

Pitts: "I don't even know how the technology works - it's pretty insane - but it is pretty cool how you can capture a studio tone and bring it right to the stage. We use in-ears now, and the stage is pretty clean - no amps or cabs. I have a MIDI controller to switch amp tones, and it goes right from our ears to the front of house. It's awesome."

What do you love about each other's playing? Jinxx, what does Jake do that blows your mind?

Jinxx: "Jake can come up with stuff that totally amazes me. I have no idea where he comes up with it all. Truthfully, he can play circles around me. As we write together, we sometimes feel like we share a brain. He'll write an awesome verse, and I'll come up with a chorus that flows right out of it - we have a way of completing each other's sentences. But on the guitar, he'll always surprise me."

And Jake, what about Jinxx's playing is different from yours? What does he do that astounds you?

Pitts: "He does this thing where he writes counterparts to my lines. I'll write a lead, and he'll come up with a crazy harmony - it's incredible. He can weave his guitar with mine in a way that always surprises me. I don't know how he comes up with that stuff, but it always cool when he does."