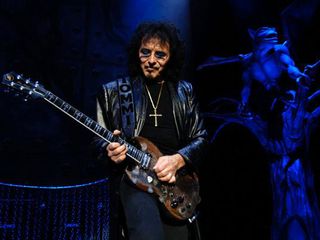 Black Sabbath/Heaven And Hell guitarist Tony Iommi is set to undergo surgery for a debilitating hand condition, much like the one Eddie Van Halen went through recently.

Iommi, responsible for some of heavy metal's most monstrous riffs, revealed that he feels constant pain in his right hand (the one he frets with - he's a lefty), and that his only course of action is to go under the knife.

"After this run, we're going to have some time off," Iommi told the Aquarian. "I've got to have an operation on my hand. It's sort of a major thing I need to get done and I've been putting it off."

Iommi said he'd recently spoken to Eddie Van Halen, whose own surgery will have him on the mend for the next few months. Van Halen encouraged Iommi to go ahead with the procedure.

The propect of 'going under the knife' to treat a hand condition is surely a scary one for any guitarist. For Iommi, however, its magnitude takes on added dimensions:

When Tony Iommi was 17, he lost the tips of his middle and ring fingers on his fretting hand while working in a sheet metal factory.

Through the years, Iommi experimented with various methods of replacing the missing ends on his digits - everything from self-made plastic coverings to thimbles topped with leather. Nowadays, he uses custom-made tips.