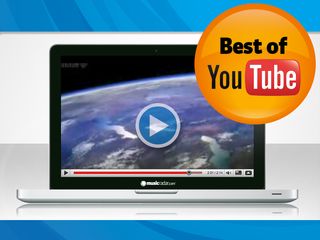 This week, among other things, we're going back to nature with Sigur Rós and enjoying a little introduction to mathcore. Yes, that is a musical genre...

Live From Daryl's House features Daryl Hall chatting and jamming with other artists in his - you guessed it - house. This clip shows him telling electrofunk duo Chromeo how he chanced upon the beat for the awesome I Can't Go For That (No Can Do), and then sees them all playing a rather excellent version of said song. Ben Rogerson

If you're unfamiliar with Brit mathcore act Rolo Tomassi then here's the perfect video introduction. They play ludicrously-terrifying music, have a lead singer with a voice like a Velociraptor (although she can - on occasion - sing like a human, too) and, according to Wikipedia, "are all grade eight on their instruments". No shit! Chris Wickett

The piece of film that helped bring Sigur Rós to the masses - who knew they'd provide such a perfect soundtrack to the forces of nature. Must be an Icelandic thing. Regardless, the band's new album is apparently "slower and more ambient" than anything else they've done before. Yes, "slower" AND "more ambient." Wow. Tom Porter

An 'aesthetically challenged' contestant from Britain's Got Talent, we'll call her Susie B, covered Arthur Hamilton's Cry Me a River a few years back. Contrary to the show's title, it's not that great. It's certainly not up to the standard of Julie London's version in The Girl Can't Help It. For some real aptitude, have a peek at Tony Clef's skilful arrangement for solo guitar. Even if he's not British. If that's too mellow for you, note the sample in this. Jon Sherrard

Whilst we're still figuring out how to score one of those cool Gunz Don't Kill People, Lazers Do tees given out at SXSW here's the latest clip from 'Gnarls Barkley for hipsters', Major Lazer According to the spin, "Major Lazer is a Jamaican commando who lost his arm in the secret Zombie War of 1984." Actually, it's the dancehall project from cool-as-hell DJs Diplo and Switch. Hold The Line is the track that's already blown up everywhere, but this hilarious clip starring "internet phenomenon" Andy Milonakis is a similarly boggle-friendly blast. Braaaaaaaaaains... Mike Goldsmith

Cut during the 1982 Long After Dark sessions, this most garage-y take on one of the biggest garage rock anthems of all time is loose, energetic and matches the original for raw sexuality. Sometimes it helps bands break the tension in the studio by bashing on some covers. Petty & the Heartbreakers picked a good one here. Joe Bosso