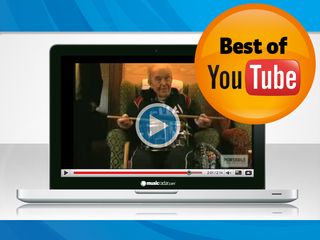 If you're in the UK, this is a long weekend (big up the bank holiday!) so you've no excuse for not settling down to watch this week's best of YouTube.

The Black Keys play Your Touch in a record store

Black Keys frontman Dan Auerbach visits the UK in a matter of days to promote his excellent solo album. We have tickets for the London show, and we can't wait. In honour of his grimy blues prowess, here's The Black Keys making a sublime noise at an instore gig in Nashville. Chris Vinnicombe

Raphael Saadiq - Sure Hope You Mean It

Saadiq's excellent Motown-inspired album The Way I See It has been available for a while in the US, but it's only just landed in the UK. Here he is performing on this week's Later Live show, proving that he's got the look, the band and - most importantly - the songs to carry off his old-school soul routine with aplomb. Ben Rogerson

A sell-out concert at Shea...screaming girls...a record attendance...The Beatles are playing, right? Wrong-em, boyo. It was Grand Funk Railroad back in 1971. Although Rolling Stone magazine had tagged them "the worst band in the world," thereal truth is, theywere atight power trio who knew their way around a hit tune. And check out Don Brewer going ape behind the drums at the song's crescendo. Joe Bosso

Eminem does horror at 3 A.M.

3am is the third Relapse release, the video makes its debut today (Sat 2 May) and if this trailer is anything to go by, it's a real horror. Watch it, if you dare. Tom Porter