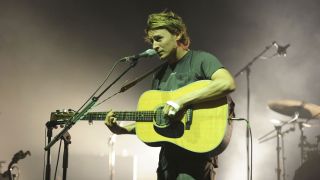 ACOUSTIC EXPO 2014: Ben Howard is one of those characters that's hard to dislike, regardless of how you feel about his music (full disclosure: we feel damn good about it). Having started out in Falmouth's pub scene, he went from open mic nights to worldwide act by touring hard, keeping a level head, and utilising a thoroughly unique approach to acoustic guitar.

Who better then to give you some solid advice on developing your playing, work ethic and musical career?

Ben hit the limelight shortly after Mumford & Sons and many of the stars of the revivalist London folk scene of recent years, but says being based in the "sceneless" South West was a real benefit.

"We were on the outside looking in at that... But we were never part of it," he explains. "I've definitely been a little bit jealous at times, but it was quite nice because you could watch everyone in London doing their thing and we were miles away going, 'Right, let's put this record down.'"

The aforementioned album, Ben's top 5 debut, Every Kingdom, was released on a major label (Island), but recorded on a budget of next to nothing in a converted Devonshire barn.

"We were just amazed at the production levels you can get [from DIY recording]. That you can have those songs played on the radio," he recalls.

"You don't have to spend loads of money… It's about what you put down. For me, recording was a lot about honing my guitar skills and honing my singing. You can have the best mic in the world, but if you put something horrible down then it's always going to sound shit."

Getting gigs can seem an overwhelming task when you're starting out, especially if you're trying to gain experience in front of a neutral audience. Open mic nights formed the basis for Ben's success.

"I won £40 in an open mic competition when I was 17 and thought, 'This is amazing!'" he says of his live start. "We'd get residencies in the local pubs. It was just an excuse to have a free tab at the bar, and then at some point people started chucking me a few quid for it. There was no game plan to any of it."

4. Have guitar, will travel

Have you noticed that it's the hardest touring bands who have the most sustainable, dedicated fanbase? That's no coincidence. To build a good following you'll need to play a lot - taking progressively bigger steps away from home.

"[Starting to tour] was the big leap," agrees Ben. "We would set up our own little tours and say, 'Well, why don't we go to a few places with this?'" he explains. "[Then] I dropped out of uni and just smoked loads of rollies, drunk tea and pretended that I was 'a musician' and that I didn't have to work. We started doing loads of tiny shows and I'd drive around in a van with a PA in the back."

5. A little cynicism is good

Most creative types are stereo-typed as dreamers at heart. We're constantly told to think positive, but as Ben has found, a little cynicism can be very healthy - and it's especially important once you've 'made it'.

"I've always been taught to have a slightly cynical outlook on it all - not in a negative sense, but just in a 'real' way," says Ben. "I think as soon as you start believing you're doing something superior to other people, then you start losing the plot."