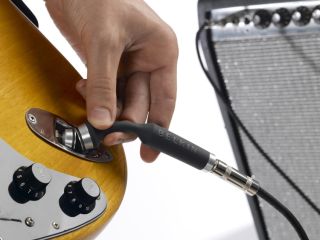 For cable guys and girls everywhere...

Every gigging guitarist has suffered that all-too-familiar sinking feeling at some point. No, not the realisation that playing to five guys and a three-legged dog in a bar on a Tuesday evening isn't going to make you a millionaire, although probably that too.

We mean the expletive-inducing realisation that the popping sound you've just heard is the sound of your guitar cable detaching from either your amp or your axe. Typically, this will have occurred mid-solo, or halfway through your best riff.

We were hoping that Belkin's new BreakFree connectors would provide a solution to this age-old problem that doesn't involve gaffer tape, but sadly not.

What they do provide though - via a magnetic breakaway connector that appears to operate along similar lines to a MacBook power supply - is the assurance that if your cable does get subjected to extreme tension, the connector will detach silently without the nasty aforementioned popping sound, and without risking tension damage to the cable itself.

Belkin also claims that there is no degradation in audio quality. Test one out for yourself when retailers worldwide have stockfrom September 2008 onwards. For more, visit the official Belkin website.