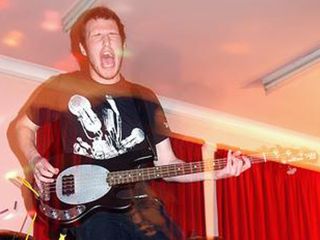 Scottish bassist Richard Allan headbanged a little too hard at his gig in Edinburgh Friday night with his "emo-esque metal band The Day I Vanished. Following the show, Allan felt his eyesight go blurry and assumed he had been dazzled by stage lights. But the bass player had actually torn his retina as he jumped around the stage to his band's tunes.

"I guess I do go a bit mental at gigs," Allan said. "We all leap about the place and headbang because we love our music, but I never thought it would make me start to go blind.

"I was at the bar after the gig and noticed things were blurry, and thought I'd maybe been looking at a light for too long. At the hospital the next day they said I'd need an operation, which is a massive shock as I've never had a proper operation before. But I'm made of tough enough stuff to get through it."

Even after surgery, doctors expect Allan's vision to further deteriorate. Nonetheless, he has vowed not to miss any of the band's upcoming gigs on their UK tour.