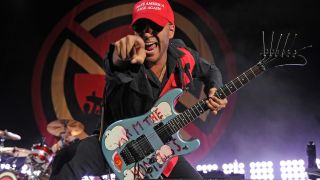 DJ scratches, sci-fi ray guns, air-raid sirens, helicopters, theremins, whooping cranes, earthquakes and various other squeals and roars - throughout his recorded career, Tom Morello has made a name for himself by producing sounds with his guitar that bear little resemblance to that of an actual guitar.

Interestingly, Morello's feats of six-string prestidigitation - starting with his major-label debut in the band Lock Up and right on through his triumphs in Rage Against The Machine, Audioslave, Street Sweeper Social Club and even on his mostly acoustic-driven Nightwatchman releases - weren't performed with the guitar of his dreams, but rather on an axe that for the better part of two years was more of a nightmare.

Such has also been the case with his rig, consisting of a JCM800 2205 50-watt head and a Peavey cabinet: Although Morello reveres the Marshall sound, he purchased the 50-watt model and the Peavey cab only after his favored Marshall head and its matching cab were stolen from his van back in 1988. With little money and no time to shop around (he had an important Lock Up demo session booked), the guitarist had to take what he could get.

Nevertheless, Morello learned to adapt, and in the case of the guitar (dubbed 'Arm The Homeless' in the early Rage days), he used its shortcomings as a springboard for his own fervent creativity.

In this, the first of a MusicRadar series called All-Star Gear, we spoke with Tom Morello about his famed Arm The Homeless guitar and Marshall/Peavey rig. "Misfit toys," he now affectionately calls them. While they may not be what he wanted, turns out they were just what he needed.

How did you first acquire the Arm The Homeless guitar?

"The origin of the guitar dates back to 1986, pre-Lock Up. I was bumping around between some crummy Hollywood jobs, making $13,000 a year - no goldmine, but it did provide for some income, and it allowed me to save up and get a guitar.

"I went to this place in Hollywood that builds guitars. I'm no luthier, I didn't know anything about woods and what have you - you go to this place, check off all these boxes, and they build it for you. They made me the shittiest guitar in the world, but it's what would ultimately become Arm The Homeless.

"Everything about it was bad: it looked bad, it sounded bad, it was grotesquely overpriced, and over the course of the next two years, I changed literally everything about it except for the piece of wood. I got the guitar and hoped I would sound like I was playing Mr. Crowley on it, but it was pretty bad. I didn't know what to do - I had spent all of my money.

"Over time, I swapped necks on it maybe four times; pickups came and went maybe a dozen times; the whammy bar - I tried every different version of Kahler and Floyd Rose; all of the internal electronics were gutted, just me trying to get it right. I'm not much of a builder, so every time I got an idea I brought it to some new guitar shop and had it worked on.

"Finally, I found a graphite neck in a bin at a place called Nadine's Music, and I put that on. It's not a Kramer neck, but it's got the Kramer end to it - it's a knock-off. Then I put some EMG pickups in it, and the whammy bar was changed to an Ibanez Edge.

"At this point, I gave up and said, 'OK, it's never going to sound like what I hear in my head, so I'm going to stop worrying and fucking around, and I'm just going to play music.' Just to make it clear: I wasn't happy with where the guitar was at, but I settled."

You must have become happy with it, however, because now you can get any guitar you want, yet you're still playing Arm The Homeless.

"Well, here's the thing: When I made the decision to stop searching for a sound that just didn't exist in that guitar, and I just started creating, I learned to take the sounds the guitar had and found ways to make music that I liked with them.

"The bounce that's in my contribution to the riffs of Rage Against The Machine have a lot to do with that front pickup. I never really liked that sound; in fact I was quite disappointed with it, because it has a very single-coil sound. But that is the sound - that front pickup."

Let's talk about the look of the guitar. How did the hippos and the slogan come about?

"They're literally the only thing I can draw, and I can only draw them facing the one way. I drew them on and then painted them. As for my other change to the look of the guitar, this was in the early days of Rage Against The Machine. We were set to play at the Whiskey, and just before going over to soundcheck I scrawled 'Arm The Homeless' on the guitar. I liked the juxtaposition of that kind of provocative and militant situationist slogan with those four smiling hippopotamuses all facing in one direction.

"Then I started stringing the guitar the opposite way, with the balls coming out of the top so they can wave around. Actually, I did that in my high school band. I remember one of the guys in school - and a far superior musician - kind of looked down his nose at my little band. One day he said to me, 'Dude, cut your strings. You do not dare have floppy strings like that unless you're in the baddest band in town.' Well, when I was in Rage Against The Machine, I was in the baddest band in town, so I let my strings fly!" [laughs]

What do you continue to draw from this guitar, one that you were never 100 percent happy with?

"Well, there's a line of demarcation. That guitar and I have spent tens of thousands of hours together, and I've grown very happy with it through the years. For somebody who isn't particularly sentimental about instruments and all that stuff, I admit that I've become very sentimental about that guitar. I was playing it today, as a matter a fact.

"I had an exact replica of it made up as a back-up, and frankly, it's a sturdier version - the sound is a little bit clearer, it's a little bit heavier - but the one that I trust is Arm The Homeless. I don't really look at a guitar as something that does slave labor; it's more of a colleague. It listens to me, and I listen to it. It's that combination together that makes the music that we make."

Speaking of colleagues, you've long relied on your Marshall amp and Peavey cabinet.

"Absolutely. I remember this one session in Lock Up, probably around 1988, I had the Arm The Homeless guitar, I had the Marshall, I had the Peavey, and I was getting pretty frustrated at how everything was sounding. I spent a good four or five hours just sitting there, fiddling with the guitar, fiddling with the knobs on the amp, and then I arrived at these certain settings on the Marshall - I marked them, and they're still there to this day. Those are the same markings I used when I played with Bruce Springsteen the other day on Jimmy Fallon."

Do you remember where you got the amp and cabinet?

"Sure, I do. What happened was, all of my gear got stolen out of my van on a Valentine's Day, and the next weekend I had to record a demo with Lock Up. I was so bummed. I went to the police station to report it, and they thought I was just making it up to try to get some insurance money. I was like, 'The stuff isn't insured. It's just gone!'

"So I went to Nadine's Music - the same place where I got the neck for Arm The Homeless - and they only had one cabinet, the Peavey 4x12, and they had two heads, the Marshall 50-watt head and something else. So I bought the Marshall and the Peavey because that's what they had."

What gear was stolen out of the van?

"It was a different Marshall head - I think it was a 100-watt - and a Marshall 4x12 cabinet. The head that was stolen was a better amp than the one I wound up with."

Maybe the thief still has the gear. Think he'll read this and go, "Oh my God… they're talking about me!"?

[laughs] "Yeah - 'I stole Morello's stuff!' The good thing is, I had a crate of effects pedals, but for some reason that wasn't taken. Maybe he didn't see it, maybe he couldn't carry it away - I don't know."

Now, most guitarists, at the first sign of success, whenever they get that first big check, would've gone out and bought whatever they wanted.

"Yeah - 'I'm gonna get a big stack of stuff!' [laughs] No, I'm loyal to my misfit toys. But by that point, it became 'if it ain't broke, don't fix it.' There were songs in the world like Bombtrack, Know Your Enemy, Killing In The Name - stuff like that. At that point, that little rig was sounding pretty good."