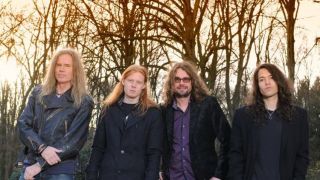 "I was waiting for a voice in the back of my head to start screaming instead of whimpering."

It's no surprise that Adrian Vandenberg feels like he's back at square one.

It has been a staggering 17 years since the guitarist last put out an album, and even that was an oft-overlooked collection of live acoustic recordings with Whitesnake.

Bizarrely, it took the bumbling former England football coach Steve McClaren to bring Vandenberg out of his self-imposed semi-retirement. When McClaren led Vandenberg's beloved FC Twente to their first ever league title, the former Whitesnake guitarist, who rose to fame as part of Dutch rockers Vandenberg in the early '80s, was asked to pen and record a song to mark the occasion.

He did, and there you have the genesis of his new band, Vandenberg's Moonkings. With the band set to release their debut album this week, we spoke to Adrian about his return, legal wrangles and how David Coverdale tried to nick his girlfriend....

Why did now feel like the right time to return to music?

"I wanted to stay away for a couple of years after we stopped with Whitesnake in 1999. In '99 my then girlfriend and I had a baby girl. When the baby was three, her mother and I split up, and I didn't want to be one of those dads that sticks his nose around the door once a year to say hi. I wanted to see her grow up, so I planned on adding a couple more years to my break."

How did a couple of years stretch to almost 15?

"I was perhaps waiting for a voice in the back of my head to start screaming instead of whimpering. My local soccer team became champions and they asked me to write an anthem for them. Then they asked me if I could play it live, and I couldn't because I didn't have a band, but I thought I'd put a band together with guys from my hometown. I found the singer, Jan [Hoving], because his band had supported Whitesnake in Holland. The drummer [Mart Nijen Es], I had actually judged his band at a talent show when he was 12. I said to him, 'if you're half as good as you were ten years ago then you've got the gig!'"

Around the time of writing the football song you ran into some trouble about using the Vandenberg name. Did your former bandmates object to you using that name?

"Yes, and it's still going on. They lost two court cases already. I didn't want to use that name anyway for this band because it's a new band. They want to use it, which is kinda strange. It's like Carlos Santana's band going out as Santana without him. That's the strangest thing that's ever happened in my career - 30 years later people trying to take my own name."

Was the Moonkings album written as a band, or were you working on it alone?

"I wrote everything on my own, just like in the Vandenberg days. I love the process. I wanted to see what came out and it was the stuff that's closest to my heart, which is blues/rock-based music. I'm extremely happy with it. I'm still playing the album for my own entertainment, which is completely unusual because you're usually sick of it."

Was it a conscious decision to put a band of unknown musicians together to form Moonkings?

"It is what I wanted to do. I was getting bored with all these so-called supergroups. You read who's in it and know exactly how it's going to sound, and you also know they're going to fall apart after one or two albums because of clashing egos. I like to surprise people."

How did you choose where to record the album?

"I spoke to the new owner of the original studio where I recorded my first project, a band called Teaser, when I was 21. That studio was a top studio - everybody recorded there, from Def Leppad to Elton John. It had gone down a little bit over the years, but I ran into a guy that has put millions into the studio over the last three years to put it back where it belongs. I ended up in the same room I recorded in when I was 21. It was a very cool 'full circle' kind of thing, especially with the drummer and bass player in this band being the same age I was back then."

And how about in terms of the sound you were after?

"I wanted to build a bridge between the best stuff of the '70s and the dynamics of right now. I love the dynamics of bands like Alter Bridge and Foo Fighters, so I wanted to marry the two. I could do that at the studio because they had the great vintage gear and the API mixer and a Neve console. That helped us get the vintage sound with an in your face, aggressive mix."

What was your go-to guitar rig?

"I used my Les Paul. It all felt so roots-y that I went back to my old faithful Les Paul and a couple of my Marshalls. I ended up using some very vintage stuff, like a 1959 Fender Bassman and the seventh Marshall amp that Jim Marshall built on his kitchen table in 1962. He signed the back of it with a Magic Marker. It's amazing. It looks more like a toaster than a Marshall, but it sounds amazing. I had a 1961 Vox that was supposedly used by John Lennon. I thought I could do with some John Lennon mojo."

How does that differ from the gear you'll take on the road?

"I always end up with a Les Paul and a couple of Marshall stacks. It's just the feeling that you get from those. Maybe it's just because all of my heroes played those. But I've tried a lot of stuff over the years and I keep coming back to this combination and get an ear-to-ear grin on my face when I play those."

Going back to Whitesnake, it seems like you still have a great relationship with David Coverdale...

"When they play in Holland I always jump up and play a few songs with them. It's really great to still have that relationship. The first time I met David was when he invited me to a Whitesnake show in 1982. We hit it off right away. He wanted us to work together, and I was pissed off that I couldn't do it at the time because he was one of my heroes.

"But we had an instant connection - he proved it by going straight after my girlfriend at the time! That was typical David! We're still friends - he's been so encouraging and has been pushing me over the last ten years to make a record. He'd say to me, 'Hey, you lazy Dutchman, when are you going to make an album?' So he definitely pushed me to make this album."