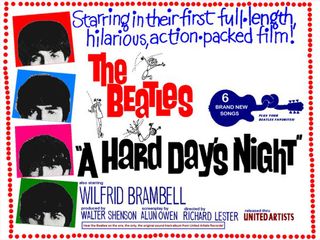 Critics say they love A Hard Day's Night. Who's to argue?

The Beatles' A Hard Day's Night is the best reviewed movie of all time - so says Rotten Tomatoes, which just compiled a list called, appropriately enough, the "50 Best Reviewed Movies Of All Time."

The 1964 black-and-white rock 'n' roll comedy scored a whopping 100% Fresh ranking - out of the 70 reviews counted - putting The Fab Four's cinematic debut, directed by Richard Lester, at the toppermost of the poppermost.

While this will no doubt come as sweet news to the millions of Beatles fans around the world, the fact that A Hard Day's Night, a madcap knockabout filmed at the height of Beatlemania, outranks spoolers such as Citizen Kane, The Godfather, Casablanca and other various and sundry masterpieces might be something of a shock.

Still, it should be noted that Lester's breathless form of guerrilla filmmaking and fast-paced editing presaged music videos and MTV.

Hampered by time constraints and a half-a-shoestring budget, the director had no choice but to rely on nothing more than his own impetuous creativity, Alun Owen's sharp-witted screenplay, The Beatles' sheer brilliance and magnetism, plus one "clean old man."

In its consensus of A Hard Day's Night, Rotten Tomatoes writes, "Despite its age, [it's] still a delight to watch and has proven itself to be a rock-and-roll movie classic. Witty one-liners, classic pop songs and world-class charm build up to happy-go-lucky moments of liberation that capture the sheer exuberance, innocence and rock n' roll spirit of four young men trying to make their own rules in a world determined to confine them."