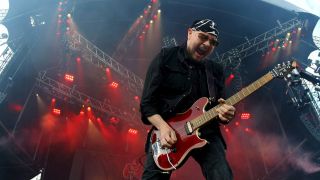 Saxon's metal crusader Paul Quinn on being schooled by the blues, slaying Donington and what to do when things go south in Venezuela…

Got my first real six string

"My first guitar was some cheap Spanish thing. Before that actually I had a plastic guitar with a chord book called Play Like Elvis or something. From there I went through the cheap Spanish thing to a Rosetti, that one had a typical flat fingerboard. That thing was almost impossible to play unless you had an iron bar for a first finger."

"I was always torn between wanting a Strat and a Les Paul when I was a kid. I used to draw both of them on all of my school books. I ended up buying a Fender Jazzmaster. Shortly after that I got myself an SG Junior. I still love Strats and Les Pauls today."

Let me show you the way

"From hearing Clapton I checked out all of the blues guys and then shortly after discovered Hendrix. I probably play closer to Hendrix than I do Clapton. Discovering Hendrix was a big moment for me. You can still hear things today in his playing that you didn't notice the first time you heard him.

"Hearing people like Steve Howe of Yes was also very big for me. I checked out all of the early blues guys like the three Kings. You had to check those guys out, they influenced everyone. I loved the fact that Clapton was like a guitar singing. That was down to his vibrato and I tried to emulate it - I ended up with something even more vocal-sounding."

The future is here

"I'm a bit on the fence with gear. We like to use real amps but then we carry Kempers around with our Marshall sounds pre-loaded. We try to hire Marshalls wherever we go but if we can't, the Kemper still sounds like a Marshall. We've been doing that for a couple of years now. I can't say they're easy to use though, it is very technical. We rely on the back button a lot!"

When I try to sing you say I'm off key

"I don't know whether to admit to this, but I had quite a bad flu and altitude sickness in Venezuela one time and I started a song in completely the wrong key. I went over to the other side of the stage to make sure it wasn't someone else playing it wrong before I realised that it was me. We still laugh about that today so it must have been funny at the time. How did I recover? I kept a straight face! I only admitted it later on."

I want to make that connection

"Being in touch with your crowd is the key to putting on a great show. You need to tailor the entire day so you don't get over-excited before the fact. You need to have a gradual build throughout the day, just go for it when you get on stage and then collapse afterwards.

"If you want longevity in music you need to have focus. You also need to be passionate and you should never count the hours you're working because there is almost no end to it. I find travelling more a difficulty than the actual playing nowadays."

"We've had some great gigs down the years. If I had to pick a best one it would be a toss up between Donington in 1980 when we were in the charts and riding high, even though we were low on the bill. We were the underdogs and we went for it.

"Or the other one would be the 10-piece Saxon that played at Wacken last year. That was a complete surprise the way we did it. We did a half set as we are and the other half with strings, keyboards and percussionists. That was fairly difficult to pull off. We had to have click tracks in our in-ears for that one."