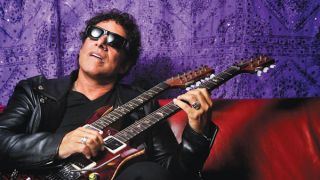 Any way you want it

"The key to improvisation is your imagination. I can see the landscape. I'm very artistic with paints and drawing and always have been since I was a kid. You have a blank canvas, a bunch of colours - which are all the guitars I have - and it's very much like painting a picture.

"It's also about finding a drummer that can read your mind and be able to see what you're seeing. Steve Smith's been that for me."

If I had a Hammer

"The first solo records I did were with Jan Hammer... So having him all over Vortex was really amazing for me. I love sparring with him and co-mingling our leads.

"When I sent him the finished masters, he just wrote back to me saying, 'It's all fucking amazing.' For me, to hear that from him, it was well worth the over-a-hundred Gs I spent on the record. That's enough for me."

If you're going to San Francisco

"[When I was 15] I was in this studio in San Francisco one day and this guy was trying to sign me to some frivolous lifetime contract where they would own me forever. I really wanted to do it because I wanted to record and my father wouldn't let me do it. At the time I was really pissed off. Many years later, I thanked him."

A six-stringer in a smoky room

"In the early 70s, I'd play Elvin Bishop's young guitar shoot-out every Thursday night at [legendary San Francisco jazz club] Keystone Korner. I got the reputation for being able to gun down any player who came into town.

"It was funny, because I was 15 - I was under-age and it was a bar - but the club owners were very cool to me. I'd wander up and down Broadway and go into all these clubs and they'd let me play, but I'd have to wait in the basement before I went on, then I'd have to go out through the back door!

"Eventually, I met the Santana guys, and within a couple of months I was in that band."

"We've recorded a new Santana album [with the band's early 70s line-up]. It's done. We recorded up here in Las Vegas in the studio Carlos likes to work in.

"We cut 18 tracks; it sounds very organic and it sounds like where we left off on Santana III. No-one else sounds like Carlos Santana - and he's playing his ass off on this record."

You feel alright, when you hear the music play

"Being in a band, you learn the benefit of a democratic decision. It may not be exactly what you want to do at the time, but good things can happen from it.

"I learned tremendously, when I first met Steve Perry, about how to write a hit pop song. That was really left-field for me when we went in that direction, but I'm grateful to this day [that we did].

"In Don't Stop Believin', we've got the most-downloaded song in history. I still can't quite believe that! But we'll take it!"

"The bravest thing we've done was probably moving on after Steve went. It definitely was not easy, climbing back up the mountain, but we worked our asses off for the last 18 years, rebuilding the band and the audience, and now we're back there.

"I write Steve all of the time. Sometimes he writes back. Most of the time, he doesn't. But the door is always open. There's really no need to walk around with chips on our shoulder, no matter what happened back when everyone was fucked up. We're men, and if we're not going to play together, let's just be friends."

Neal Schon's new album, Vortex, is out on Music Theories Recordings on 23 June.