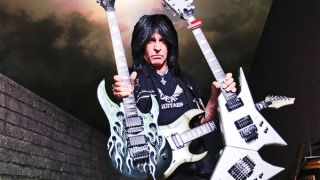 The singular MAB on his technique, early guidance from Gene Simmons and the cliches that dog the world's fastest players.

Picking up the pieces

"I started on piano at five years old. My mother played and I learned songs by watching her and listening. But the music I listened to wasn't piano based, really. I loved the sound of guitars, so I switched to guitars at 10 and I never looked back."

"How do you look at Al Di Meola or Eddie Van Halen and think that what they do is similar? I thought, 'Is there anything we have in common?' 'Economy of motion' is what you do with your thumb and you index finger when you hold the pick. That's the common denominator between great players: when you look at their fingers, when they go fast, the pick locks. Less is more when it comes to playing quickly and accurately."

Too fast to live

"I'm not an expert on a lot of things, but I'm an expert in music. It's always the same, century after century: critics criticise musicians who can play fast. It's not new. They did it to Franz Liszt! People want to categorise you with the same four cliches: one, 'all he does is play fast'; two, 'there's no feeling'; three, 'he can't write songs'; and four, 'I like David Gilmour better.' It's always the same!"

Can you get enough of me?

"Gene Simmons told me never to have a rhythm guitarist in my band. He said: 'Your guitar playing is light years ahead. What the fuck do you need with another guitar player? You play two guitars at the same time!' He also said one other thing that's always stuck with me: 'KISS was KISS before we had a record deal. Madonna was Madonna before she had a record deal. If you don't know who you are, then no-one else will.'"

"The quad guitar started off with the record company wanting me to challenge Steve Vai to a duel. It's insane. Steve gave me credit for doing the double guitar - even back then, he said he got the idea from me - then he had the third neck and our label literally had a meeting and said, 'We need four.'

"The quad guitar was built by Wayne Charvel at Gibson and it literally got stolen after the second show on the tour, in El Paso. Years later, we found it in England and I had to buy back my own guitar for £1,500!"

This is my music, it makes me proud

"I'm always a student and I possess an ability to play whatever I want. If you listen to my first band, Holland, I didn't start out playing fast guitar, but I was in LA and speed and virtuosity was the thing, and I was able to do it, so I think that's my biggest strength.

"My weakness is that, because my tribute songs are so well done, I'm not publicly showing how good of a writer I really am. My live show and my double guitar is known all over the world, but outside of that I've done things differently and if I did it over, I would maybe promote more of my own music."

I'm gonna make this a night to remember

"I think the most memorable show I've played was when I was in the band Holland and we were touring with Aerosmith. I had my double guitar and I was afraid to play it.

"I was nervous because no-one had done it before. I had never even played it in rehearsal. All I did was practise in my bedroom and my father said, 'Are you gonna look at it, or play it?' I played it for the first time at Alpine Valley arena, which had 25,000 seats. The place was packed and I had Joe Perry and Brad Whitford watching me!"