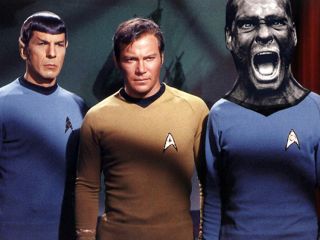 The love-in between Coldplay and Jay-Z continues, and while their friendship is certainly genuine, MusicRadar is sure this is one of music's most unlikely collaborations.

A quick rummage through the dustbin of modern music history shows that there are many more instances in music of highly unlikely friends.

"Hate fags? / The answer's yes" rapped Eminem on Criminal, which led many observers to suggest Eminem just might be homophobic. Indeed, gay and lesbian groups were infuriated with Elton John when the singer defended Eminem.

"Let the Boy Georges and the George Michaels of the world get up in a twist about it if they don't have the intelligence to see his intelligence," John decreed.

The gay lobby went madder still when the duo's 2001 Grammys duet went down in history, with Sir Elton later saying Eminem was on a par with Jimi Hendrix and Mick Jagger. A queer episode, no mistake.

Dr Dre and Burt Bacharach: "Yo, this one's for my homies!" "Yes Burt, mine too."

The writer of Raindrops Keep Falling On My Head and all-round easy listening king doesn't look very bling, but Bacharach rolls tight with hip-hop uber-producer Dr Dre. "He gave me some drum loops, bass patterns and said, 'Play with it, see what you come up with,'" says Bacharach of Dre's co-work on his 2005 album At This Time, including the standout track Go Ask Shakespeare.

And it ain't over, mofos. BB later added: "I told Dre if he ever wanted me to do strings for him on his album, I'd love to do it. He's a good guy".

Fast-forward to 2008, and Dre is getting piano lessons from Bacharach for his next album. Whatever they're smokin', we like it!

Lil' Kim: You're lucky Phil Collins doesn't 'dress' like this

2001's Urban Renewal has to be the maddest album ever, featuring a selection of hip-hop stars giving out some street love to Phil Collins. Thus the unlikely sounds of Sussudio reworked by Wu-Tang Clan's Ol' Dirty Bastard and I Don't Care Anymore crooned by Kelis. Then there's an approved sample of Collins himself, 'duetting' with the saucy Lil' Kim on In the Air Tonight.

Sadly, the album charted in Germany only, at Number 3. Which could stymie plans for Lil Wayne to cover Collins' Brother Bear soundtrack.

Written in two days at Dylan's California home, Steel Bars appears on Bolton's 1991 album Time, Love And Tenderness. Bolton reported that the legendary pop bard had called him out of the blue and was an enthusiastic partner. "He just kept coming up with all these great lines," says Bolton, whose input was...what? The supplying of an outrageous mullet?

So many musical crimes seem to be committed when rockers and rappers become awkward bedfellows, and none moreso than on this 1991 track. REM lamely attempt to bring the funk, KRS bellows like a man lost, and the world's worst rap lyric appears: "When I got to the show / Yo ho ho". Everyone should be ashamed.

Bluegrass singer and fiddle player Alison Krauss has been a leading light in bluegrass for years, yet collaborating with Led Zeppelin's 'Golden God' Robert Plant on 2007's Raising Sand album threw everyone a curveball. The album went Platinum in both the UK and US, and its ongoing success and duet tour even nixed any chance of a 2008 Led Zeppelin reunion.

If you believe certain reports, Jack White and Alicia Keys were only brought in to sing the 2008 Bond / Quantum Of Solace theme as Amy Winehouse was once again 'ailing' and unavailable. Yet, it seems that White and Keys genuinely wanted to work together - even if the pallid evidence of Another Way To Die suggests they're hardly a natural pairing. Next up, White duets with Adele for a Raconteurs b-side. Confiscate his mobile, say we.

8. William Shatner / Ben Folds / Henry Rollins: I Can't Get Behind That

Shatner was certainly star-trekking when he assembled the personnel for his bizarre William Shatner Has Been album from 2004. Shatner may be in good self-mocking form, but Folds' production is surprisingly supple on an album also featuring collaborations with Joe Jackson, country guitarist Brad Paisley and King Crimson's Adrian Belew. Then it got turned it into a ballet. Beyond weird.

In 1977, 30-year-old Bowie was just coming out of an 'interesting' period of drug-snorting, cross-dressing and politically-confusing debauchery. So obviously, 74-year-old Bing recruited him to duet on his Merrie Olde Christmas TV special. Crazier still, Little Drummer Boy went to No 3 in the UK charts.

Bowie's reasoning for doing it? "I just knew my mother liked him."

Slash has seemingly appeared on other people's records as many times as he's sparked a Marlboro, but this 1996 track with Blackstreet must be one of his oddest collaborations. Yet it kinda works. It's better than him 'helping out' Black Eyed Peas' Fergie, Ray Charles, Chic, Michael Jackson or...

Get this: the R&B star behind Closer likes nothing better than listening to Marilyn Manson, and plans to record with the self-styled God Of Fuck in 2009.

"I've wanted to work with him for ages and his people reached out to me when they heard," said Ne-Yo in September. "People might think it's a strange collaboration, I don't.
"You won't see me adopting his style. I don't think you'll ever see me in make-up," Ne-Yo adds, somewhat disappointingly.

MusicRadar is so looking forward to this one.

For their rather outré album as Passengers (with Brian Eno) in 1995, the Dublin quartet roped in the world's greatest tenor for this single. It might not be as odd as others in this list - Bono's father was an amateur opera singer, after all - but it certainly made for an 'interesting' tune. And it gave chances for Brian Eno to play an Omnichord, Bono to dress like an Italian market trader and the Edge to take his hat off. Truly historical.

Given that Muse are massive Rage Against The Machine fans, it's perhaps unsurprising that the trio had a stab at rap-rock in 2008. But the fact that Muse turned to Mike Skinner to provide the vocals was probably slightly more unexpected; the resulting jam was a fun but unconvincing pastiche demonstrating how Rage just wouldn't work if they were English. Or if their vocalist rapped as if he was struggling to read the lyrics off the back of his hand.

Minogue and Cave: "Oh no, I killed Kylie!"

Nick Cave And The Bad Seeds' 1996 album Murder Ballads features cameos from PJ Harvey and Shane MacGowan, but it was Cave's duet with Kylie that stole the headlines. The song's tale of obsession and murder was a far cry from I Should Be So Lucky. The same year the first lady of Australian pop further expanded her musical horizons, collaborating with Manic Street Preachers on two songs for her Impossible Princess album.

Scotland's Sheena Easton got her break on a reality TV show and started the '80s singing cosy hits such as 9 To 5 (called Morning Train in the US), Modern Girl and Bond theme For Your Eyes Only. Then Prince got his hands on her, and suddenly she was asking us to "come inside my sugar walls".

Prince wrote Sugar Walls for Easton's 1984 album A Private Heaven, but it was in 1987 that the pair had a hit together in the shape of U Got The Look, completing Easton's transformation from girl next door to sex vixen. Though sung by a girl from Motherwell, lines such as "Your body's heck-a-slammin/If love is good, let's get 2 rammin" didn't totally convince.

One-time girlfriend of Mick Jagger, Marianne Faithful is no stranger to close encounters with hairy rockers, but 1997 saw her feature on this cut from Metallica's ReLoad album. This song about a once-great celebrity driven mad by obscurity is pretty solid, with Faithful's vocal contribution adding something sinister to the band's characteristically muscular riffing.

Previously concentrating on 'stadium house', arch duo The KLF recruited the 'first lady of country', grandma Tammy Wynette - and a Jimi Hendrix lick from Voodoo Child (Slight Return) - for this 1992 country-tinged house oddity. It went to Number 1 in Austria and New Zealand. "Mu Mu Land looks a lot more interesting than Tennessee.... But I wouldn't want to live there," observed Wynette sagely.

These 17 are surely only the beginning...

Do you know of any weirder?