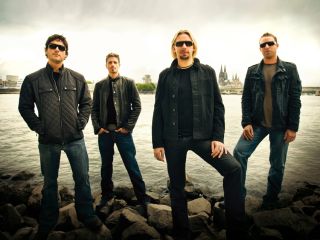 A true love 'em / hate 'em band, Nickelback are one of the most notable rock successes of the last decade. With an astonishing 26 million albums sold, they are now one of Canada's most successful bands ever.

As the quartet (inevitably) ride back into the charts on new album Dark Horse, MusicRadar digs the dirt and fascinating facts on Nickelback so you don't have to…

1. Hotel receptionists want to kill them (probably)
Ryan Peake and Chad Kroeger break the monotony of the road by checking into hotels as Dr Noah Body and Harry Houdini. Let's just hope the Nickelback wags are never called upon to perform an emergency tracheotomy. Or, indeed, to escape from a straightjacket suspended above a ravine.

2. Chad is a better guitarist than you
Chad Kroeger started as Nickelback's lead guitarist, and has retained his competitive streak. "I'll sit down and have a go with any shredder," he puffed in 2002. "I learned by jamming along with Metallica, Megadeth and Testament, and you cannot play along with those bands without a good right hand."

3. They're not really from Vancouver
Nickelback appeared on the radar playing Green Day covers in the one-moose-town of Hanna, Alberta, but left for Vancouver when Chad decided that a throng of farm-hands didn't constitute 'a fanbase'. "It's impossible to get a band off the ground in Hanna," he reflects. Agriculture's loss was rock 'n' roll's gain.

4. They learnt from the masters
Ryan Peake's bulldozer riffs can be attributed to his first tab books - Metallica's Master Of Puppets and Ride The Lightning. In the perennial 'Hammett vs Hetfield' debate, he's firmly in the big fella's camp: "I was never that into Kirk's playing. James was the guy behind those songs and those rhythms as well."

5. Chad is lucky not to be in jail
Chad's delinquent lyrics are a fair reflection of his juvenile rap sheet, whose highlights include truancy, trespassing and the theft of a small truck. "I honestly think if Nickelback hadn't worked out, I'd be in jail, on a charge of grand theft auto or trafficking," he says. If only Canada had the ASBO...

6. They splash the cash
The killer hook in How You Remind Me - when the band drop out and Chad bellows 'for handing you a heart worth breaking!' - was the idea of drum tech Andrew Mawhinney.

Chad reflects: "He goes, 'you guys should do a big stop right at the last chorus'. We gave him $5000 just for that suggestion!" Was it really worth five grand?

7. Chad is six years from death…
… according to his calculations, anyway. "I will die on my 40th birthday," he told Playboy. "I dreamed it - I'll be onstage and have a heart attack, and the crowd will think it's part of the show. It's been foretold."

8. Their name has a rubbish story behind it
'The Beatles' came to John Lennon in a dream. 'The Doors' was inspired by a William Blake poem. The origins of Nickelback were more prosaic, with the name occuring to bassist Mike Kroeger as he toiled in Starbucks, repeating the same mantra as he handed customers their change: "here's your nickel back".

9. Chris Martin is a fan
Jaws dropped when it emerged that Nickelback's red-blooded odes to sex, cars and having sex in cars had struck a chord with Coldplay's fair trade frontman. "They take a lot of flak from people who've never done f*ck-all in their lives," he says. "I think they're great."

10. They murder axes
When Ryan comes offstage from a night of abusing guitars, he likes to… abuse more guitars. "Gibson send me unfinished guitars and I go to work on them," he explains. "We're from cattle country, so I've burned a horseshoe shape on one. I tried to make one look like a tree trunk, and another one - a Flying V - I beat the absolute shit out of. I'd never do it to a vintage guitar, but with new ones it doesn't matter."

11. They brought Dimebag back from the dead
Side Of A Bullet features a posthumous Dimebag Darrell solo assembled from outtakes from Pantera's Vulgar Display Of Power and Far Beyond Driven. The tribute to Nickelback's murdered drinking buddy remains the band's most personal moment.

"The last time I saw Dimebag, it was the end of a night out," Chad remembers. "I'm sitting in his car, he hands me a bottle of JD, I take a huge pull, open the door, throw up and send it back over. Then he got on the bus and that was the last time I saw him."

12. They weren't always minted…
Nickelback's financial trajectory is practically a vertical line. Debut Curb was financed by a $4000 loan from Chad's stepfather. Follow-up The State was recorded for $30,000. This year, the band signed a management deal worth $70 million. "When we were kids in a garage, we were never thinking 'God, I can't wait to be rich'," counters Chad. "More like, 'I can't wait to see all the chicks in the front row!'"

13. … but now they are, they get free guitars
As the owner of "a credit card that's got no limit", it's no wonder Chad has refined his taste in gear. "My first guitar was a black Flying V [copy]," he recalls. "It was quite the heavy metal guitar, but I traded it in years ago." The frontman now chooses from an arsenal of PRS electrics stored on a tourbus, including a singlecut hollowbody signed and delivered by Paul Reed Smith. "I call him Santa Claus!" he laughs.

14. Chad hates his hair too
The case against Nickelback has long hinged on Chad's 'spaniel-in-a-wind-tunnel' hairstyle, but it might surprise haters to learn the singer is no fan either. "I was watching the How You Remind Me video and even I was disgusted," he sighs. "My hair was terrible. It made me look so old. I was 26 and looked 37."

15. Chad has yet to tire of How You Remind Me
"You have to maintain perspective," he says. "We're not the first band to have a song like this. As soon as I get sick of playing How You Remind Me, Mick Jagger should walk up to me and slap me in the face and say 'hey, when you've played Start Me Up as many times as I have, then you can bitch'."

Still, Kroeger can alway mash up his hits to stop himself getting bored? Here's a clever thing called 'How You Remind Me Of Someday'.