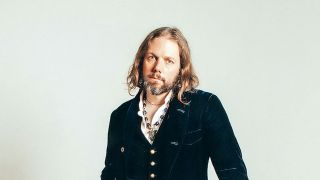 He's the guitarist in The Black Crowes and has a string of solo albums to his name - but how will he answer our 10 need-to-know questions?

"My parents bought a guitar for me at the end of 1984 for Christmas. The guitar was made by a company called Lotus. It was a copy of a Stratocaster - black with a white pickguard. The first thing I did was slap a big sticker on the back. We were way into punk rock at the time!"

2. The building's burning down; what one guitar from your collection would you save?

"It's hard to think of a single guitar that I would save. The guitar with the most sentimental value for me is my 1953 Martin D-28. It belonged to my father and he gave it to me. I've played it on every record I've ever made - probably the most notable song I played it on is She Talks To Angels."

"Because I lost all of my guitars in Hurricane Sandy, I don't have as many vintage guitars. Right now, my dad's Martin is the oldest, being built in 1953. I used to have a 1929 National Duolian, that was the oldest I've ever owned. I also had a couple from the 40s."

"Yellow ones! Planet Waves makes my picks and the colours correlate to the size."

"I have never really practised, I just pick up the guitar and play. I have found that when I'm drawn to pick up the guitar, it's always positive. I never want playing to feel like work - so far I always feel joy when I'm playing.

"The thing I love most about playing guitar is I'm always learning. What I learn is always a surprise. Growing as an overall player is my favourite thing. As long as that's happening, I'm happy to play."

"A week ago. I was at my house and pulled out a guitar I haven't played in years and it definitely needed new strings. It was definitely not a graceful string change!"

"I never look back. My belief is that when I make my solo records or we as The Crowes made our records, it was the best it could've been at that time. If I wasn't happy about it back then, it wouldn't have wound up on the record.

"I'm always cutting songs that don't live up to what I expect them to be. This normally happens during the writing/recording process. Dealing with the frustration within The Crowes would sometimes drive me close to that line. It's something that I cared about so much and took so seriously. That was my music, those were my songs.

"I would write the music, the whole song, then bring it to Chris [Robinson, frontman and brother] to add his lyrics. I would also sing melodies that I had in mind to him. The whole process was important to all of us."

"Splits, ha! No, we just get up and go. We're normally just hanging out and talking up until it's time to go on."

"I remember a show in Philadelphia. It was the first show of the tour and my whole rig tanked three songs in. We spent the rest of the show trying to fix it. It's such a bummer when things like that happen. There have been some other times when things have gone wrong, but never for the whole show. I wound up just picking up my acoustic to finish the set."

10. What song would you play around a campfire?

"Right now, Bert Jansch's Blackwater Side. It's one of my favourites to play. It's in the DADGAD tuning, which I haven't played with much. It's always cool to delve into new tunings and songs to see where they can take me."