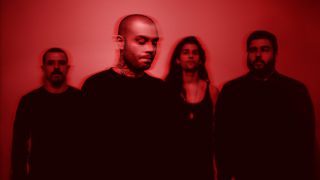 Some of you may know Night Verses for their compelling blend of post-hardcore, prog and metal; others might have heard of the LA four-piece via their acrobatic drummer, Aric Improta, who became an internet sensation when he backflipped between two drum kits earlier this year.

Either way, you should get acquainted with guitarist Nick DePirro, whose rapid-fire palm-muting and effects-heavy textures on new Ross Robinson-produced full-length Into The Vanishing Light will have guitar players of all tribes weak at the knees.

Here, Nick shares his brief but considered thoughts on his favourite guitarist and desert island gear, while recalling some major pedalboard mishaps…

"My first electric guitar was an Epiphone Les Paul Special starter kit from Guitar Center that I got when I was 13."

"Fortunately, I've been able to hold onto all the gear I value the most."

4. And what's the next item of gear you'd like to acquire?

"I'd like to get a PRS Custom 24 to go with my 22. I'd also like to get some Strymon and Earthquaker Devices pedals."

"I'd be interested in exploring fingerpicking a bit more. I think a lot of cool sounds come from that, and it opens up the guitar more to play both rhythm and lead at the same time."

"Most of my practice comes from writing songs with Night Verses. I try to find ways to never repeat myself, which involves learning new techniques, or reinterpreting the same idea differently. I'm not really the type of guitar player that sits with a metronome working on scales, so my practice is always just playing and writing new things."

"There are many guitarists I'd love to sit with, but if I had to pick one, I'd be most interested in learning from Mikael Åkerfeldt from Opeth. He has my favourite style of guitar soloing, and I've always been a fan of his fingerpicking style."

8. What gear would you take with you to a desert island?'

"My PRS Custom 22 guitar, Blackstar Fly 3 amp, and a delay pedal. I could hang with that setup for a while."

"I've had cables cut out, tubes go out on my amp, and strings snap. I think the worst thing that's happened to me, though, is when I was in an earlier band. My pedalboard got unplugged three times in one song, which caused all of my pedals to turn off and turn back on at once, creating a huge wall of noise each time."

"I'd say to continue writing and recording all of your ideas, while also learning other people's songs to help expand your playing abilities."

Night Verses' new album Into The Vanishing Light is out on 8 July via Graphic Nature / Equal Vision.