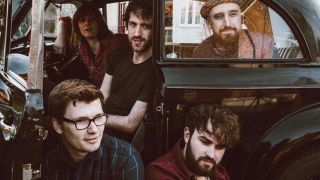 North Norfolk isn't exactly known for its contemporary alt-country scene, but the region's Morganway have risen against the odds with their own surprisingly authentic take on Americana.

Floating above the acoustics 'n' organs that populate new EP No Tomorrows are Yve Mary B's honeyed vocals and Kieran Morgan's ethereal electric playing, complete with lashings of reverb and crunchy leads, setting the group apart from their nu-folk contemporaries.

"My first guitar was an Epiphone 'Gothic' Flying V. I used it to play songs like Californication by the Red Hot Chili Peppers and Day Tripper by The Beatles. I soon traded it in for a Strat…"

"I'd have to attempt to save two! I have a Rickenbacker 12-string in Fireglo identical to the one Tom Petty is pictured with on the front cover of Damn the Torpedoes. It's got to be one of the coolest-looking guitars, and the sound is so iconic - it's all over our EP.

"The other is my PRS S2 Vela. I work for PRS Guitars Europe and it was custom-built for me last year and signed by the man himself… I have it in Antique White and replaced the bridge pickup with a PRS 57/08, which sounds awesome! The guitar feels incredible to play, and I love its retro look."

"I had an old Electro-Harmonix Big Muff pedal that I sold about 2 years ago for rent… really miss that little monster now."

"I'd love a Fulltone OCD Overdrive pedal. I borrowed one off our producer/engineer Chris Lyndon when tracking guitars for the EP and its sound is just incredible. Favorite overdrive pedal I've ever used."

"Rhythm playing. I use a lot of delay and reverb, so much of my playing is quite 'floaty', and with those effects, you can almost get away with murder!"

"I practise every day. Recently, I've been focusing quite a lot on 16th-note picking."

"It would be between Mike Campbell and John Frusciante. If I had to choose, I'd go with John. He was my main inspiration as a guitar player when growing up. The way he solos live, with that ability to inject so much passion and feel into a guitar, just makes the hairs stand up on the back of my neck."

"Well, if it has to be one, so no amp or pedals, I'd go with my girlfriend's Taylor koa acoustic…"

"We were playing a local festival in front of about 1,000 people, it was coming up to my big guitar solo at the end of the set and as I walked to the front of the stage, my twin brother Callum, who plays acoustic in the band, tripped over the mains lead that powered my pedalboard and knocked it out. I started playing and no sound came out… Thanks, bro!"

No Tomorrows is out now via Bandcamp.