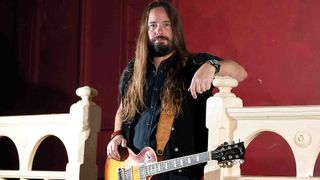 Pulling off proper Southern rock isn't something you can learn; you either have it or you don't, and Blackberry Smoke are dripping with authenticity.

The Georgia fivesome's new album, Like An Arrow, is as straight to the point as the name suggests: 12 tracks of slick picking and country twang, as well as a guest appearance from Mr Gregg Allman on album closer, Free On The Wing.

Paul Jackson is one-half of the band's guitar partnership, and a man who knows what he likes, that being Les Pauls, an ever-growing gear supply and noodling over backing tracks…

"I got my first guitar back in 1985. It was made by a company called Memphis. Everything but the fretboard was white. I was 14, and I thought it was the coolest guitar I had ever seen at the time."

"My 1979 Gibson Les Paul Standard. It's the first Les Paul I have ever owned and I'll have it for the rest of my life, hopefully. I use it at most of the shows we play. It's just a great-playing guitar! Knowing me, though, if there really was a fire, I'd probably find a way to save them all!"

"To be honest, I don't get rid of gear. Once I acquire a piece of gear, it usually stays put, which can cause a bit of a clutter in the house. I sometimes get the evil eye from my wife because there's gear all over the place."

"I have the amp-buying bug at the moment! I just acquired a 1960 Gibson Lancer GA 6 amp. Not sure what the next amp I purchase will be, but that's the fun of it to me. Hunting them down, ya know?"

"Always! I'm never satisfied! I'd like to do better with my picking technique. I think my wrist hops around too much when I play. I mean, I play fine, it's just something that I've been thinking about, so I figured I should do something about it."

"I literally just put the guitar down to answer these questions! I was playing over a Pink Floyd backing track. There are all kinds of backing tracks on the internet to jam to, so I just find one that I dig and play to it for a good bit of time. It's so much fun!"

"Freddie King - I love his playing. If he gave lessons, I bet he would whip any guitarist into shape. Just to be around him would have been a blast, I bet. Watch clips of him and his band online and tell me you wouldn't have loved to be in a rehearsal with them. He and his band were on point!"

"There are so many things that could and can go wrong, but the one thing that comes to mind is radio interference through my amp while in front of an audience. It's so embarrassing and funny. Sometimes there is nothing you can do about it when it happens, so you just have to grin and bear it."

"I would definitely say that you don't have to play leads to be a great guitarist. Some people may think that you do, but I don't think that's true at all. Sure, learn anything and everything, but at the end of the day it's about the song you and your band are performing and not your ego. Also, learn to sing. Learning to sing always helps when you play an instrument."

Like An Arrow is out on 14 October 2016 and available to preorder via Earache Records.

Me and my guitar with Blackberry Smoke