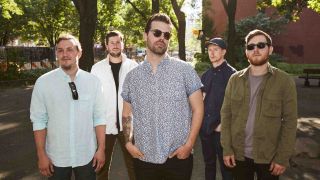 Listening to third album, Light We Made, is like taking a walk through the annals of rock history - there are echoes of Robert Smith-esque guitar textures, grunge and slacker-pop's fearless six-string approach, and emotional weight heavy enough to recall the finest of '00s post-hardcore.

"My first guitar was a Fender Duo-Sonic given to me by my father, who had played guitar his entire life: Fire Red with a white pickguard. Short scale, so my hands could play it easier. At the time, I probably wanted a guitar that smoothed out more when it was gained up, but now that I'm older, I can appreciate how nice of an instrument that was."

"Right now, my standard American Strat. It is my baby. Plays like a vat of Country Crock."

"Not really. I usually hold on to my things way too long. I'm a big sentimental in that respect. I like accumulating things and knowing I always have them. I have not sold many instruments or pieces of gear. My first head was a JCM900, and I sold that a few years back because I upgraded and had no need for it. So maybe that by default."

"Last night, and the Standard Strat through my AC30 pushed through an Orange 4x12. Love how the AC sounds through a beefier speaker."

"All aspects. Always want to get better. I would like to know a jazz scales a little more extensively. They aren't programmed into my brain as second nature yet. I've been starting to experiment with them a little more. I guess as I get older I appreciate the dissonance of the playing within the genre."

"Jonny Greenwood. Pick his brain for a few hours."

"Strat and the 'verb pedal."

"It's always a pain in the ass when your gear cuts out due to a stupid thing. Like a connector cable pops out and you can't detect and it takes like five minutes to figure it out. Very embarrassing and it's a stressful period of time. Also, unrelated, one time I walked on stage with toilet paper connected to my shirt, and as I walked across stage to set up, it flowed off my back like a nice long white tail. That's about as specific as I would like to be, haha."

"Take lessons, learn fundamentals. Teaching yourself is admirable, but I regret not learning a solid foundation of the instrument in my younger years. Now I'm actively trying to do that. Backwards logic, haha!"

Light We Made is out on 4 November via Big Scary Monsters.