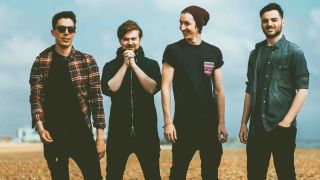 Whatever you make of Area 11's potent blend of guitars and electronics, the Bristol synth-rockers have had an inspirational road to success, with a new album, Modern Synthesis, cracking the Top 20 in the UK, not to mention a host of self-booked, sold-out headline tours. It's the stuff dreams are made of.

Guitarist Alex Parvis is the man bringing the six-string muscle with taut riffs and the odd bout of solo fury, and here, he lets us in on his background as a player and a gearhead - just don't bring up his old Paul Gilbert signature model…

"Right now, it's my Line 6 Helix - if that counts! It does pretty much everything for me, so I certainly couldn't do without it."

"Yes, I'm very sorry I sold my old Ibanez PGM300 on eBay about eight years ago. I miss it! I'm quite jealous of whoever has it now..."

"We're currently on our UK headline run, The Modsynth Tour, so I was just practising our set. The last song I played is probably Nebula, a track from our last album, Modern Synthesis."

"I'd really like to get into hybrid picking; it's something I haven't really touched on much in the past. A few players I know recently have really surprised me with the stuff they can pull off with this technique, so it's definitely something I'll be working on in the near-future."

"Probably an acoustic guitar... I doubt there's a power outlet on the island."

"Once during a soundcheck I managed to pull my entire rack unit off the cab. It fell face first into the floor which was pretty embarrassing. Luckily, the gear still worked fine and the show went really well that evening."

"If you really want to learn to sweep-pick that's fine, but you won't be getting laid for a while…"