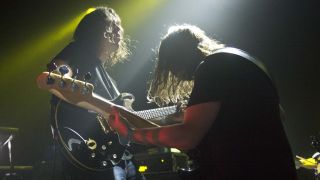 Ireland’s God Is An Astronaut remain one of the biggest names in instrumental rock, and ninth album, Epitaph, is perhaps their most imposing effort so far.

A gritty, dark aura pervades throughout the post-rockers' latest output, courtesy of moody basslines and simmering ambient textures, while colossal reverb'd guitars and keys top off the sonic approach.

Guitarist and keyboard player Torsten Kinsella talked us through the gear that was put to very good use indeed on the album - and he didn’t hold back. Everything from the band’s formidable pedal collection to plugins, drums, synths and mastering was uncovered.

“On this record, we decided to go for a warm, vintage sound,” says Torsten.

“Rob and Conor [Xenon Field, sound designers] really pushed that concept to the extreme, allowing the album to be more personalised and lo-fi.

“In post-production, most of the sounds went back through an Akai four-track tape recorder and then back into Pro Tools again.

“For the mastering, we decided to go analogue. Tim Young (Metropolis) put it through their tube outboard. It was important to keep this record as vintage as possible, so we avoided pushing the record too loud and kept it quiet to moderate.”

“Most of the keys, synths went through the Niio Analog Iotine Core 3 - I love how it crunches up the lines and it immediately gave the synths a warm vintage character when used subtly. On Seance Room, we really pushed it to the extreme.

“The Electron Analog Heat was used on the electronic drums on Medea. I can remember Xenon Field bringing a Korg MS-20 synth on Winter Dusk/Awakening and an Electron Octatrack to create unusual atmospheric sounds by putting some of the pianos though it.

“The Mutronics Mutator was used a lot, too; it was very useful to help shape sounds in the mix and also giving it an analogue character, which was particularly helpful for the software synths.

“We put a couple of the sounds through an old WEM tape machine. We used a lot of software plugins too, including Soundtoys, D16, Plug-in alliance Unfiltered audio plugins.

“We used the Roland Jupiter 6 for all the low synths, and the synth on Seance Room was the Dave Smith Voyager. Native Instruments, Spectrasonics Omnisphere and Keyscape were used a lot, too."

“I used a few different guitars. The National Glenwood 1962 originally belonged to John Entwistle from The Who. The guitar was originally in an unplayable condition but was restored and improved by Jimmy Scanlon (from Jimi’s music store) who fixed the electronics, guitar luthier John Moriarty put a truss rod into it and Curtis Novak repaired the bridge pickup. It’s really turned out to be an amazing guitar - the P-90 style pickups sound wonderful on clean and for distorted settings.

“I used that guitar a lot throughout the Epitaph album. The other guitar I used was a 1956 Gibson Les Paul Jr. Jimmy Scanlon immediately rang me when this guitar came into his shop, and when I tried it, I was amazed at how good it sounded especially for the more driven guitar lines.

“The guitar needed quite a bit of work before I could record with it so I brought it to Tony Thompson who usually sets up all my guitars. The guitar was used on all the heavier distorted lines.”

“I also used the Gretsch Custom Shop Penguin guitar on a good few parts, too - this will be my main guitar live. Jimmy, who played on the record, used a 1961 Gibson Les Paul Junior and modern Gibson Les Paul.

“Brian Harris, who did slide guitar on Mortal Coil used his Gibson ES-335.

“We used a lot of different guitars throughout the record including the Rickenbacker 330 and the 1967 Gibson ES-345. The Martin acoustic was used on a song, too."

“Mostly we used the 1968 Marshall Superbass Plexi with a 1970 cab (original Greenbacks) on the distorted lines, Hiwatt Custom DR103 with a Fender Bassman on the cleaner tones.

“For re-amping I used a Doctor Z Maz 38 with an Orange cab. We used a combination of the Shure SM57 and Royer Labs R-121 to mic them up.

“Fractal Audio Axe-Fx XL was used a lot too for the more experimental tones and for some of the clean and distorted tones, too. All the guitars went through the Neve DPA 1073."

"We used a wide variety of pedals.

"Jimmy Scanlon has an original Klon Centaur pedal. This was mainly used to increase the gain into the Fulltone OCD (Version 2) and sometimes even into some of the fuzz pedals.

"I used that with my favourite delay, MG Music That's Echo Folks with the pigtail. Again, using the pigtail, I was able to further twist the pitching; that combination really captures the dread and ugliness that some of the music was conveying.

"Some of the clean tones still had a bit of drive; again, we used the Klon Centaur, Paul Cochrane’s Timmy pedal and the Secret Audio Red Secret. We ran a few of the clean tones into the Red Panda Particle - I love that pedal; it’s a granular delay/pitch-shifter. It chops your signal into small grains and then does various strange, trippy, robot things to it, using the techniques of granular synthesis in real-time. Results range from radical pitch and delay modulation to shimmering repeats to stutter/glitch sounds.

"A few of the keyboards also went through the Snazzy FX Tracer City; with that pedal and the DigiTech Space Station we were able to create some interesting textures."

"Nearly every driven sound (guitar and keys) on post-production went through the Niio Iotine Core 3 - this is the most amazing distortion filter unit ever created.

"When I needed a cleaner tone, we would put it the Mutronics Mutator filter bank; I used this almost like an equalizer - when a sound wasn’t sitting or blending correctly, the Mutator resolved the issue in seconds."

“For the bass, we used a Fender 1966 Precision Bass, which belongs to our father Thomas Kinsella. It’s probably the best P-Bass we have ever heard.

“We went through a noble preamp then into a Neve DPA 1073 into Pro Tools. For live shows, Niels is using a 59 Custom Shop.”

Epitaph is out on 27 April via Napalm Records.