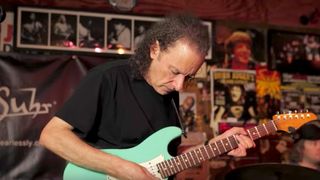 “The Musicians Institute Online program is a great way of learning guitar without moving to Hollywood,” begins fusion guitar virtuoso Scott Henderson, who rose to fame in the mid-80s after forming Tribal Tech.

His instructional videos are widely considered the best out there - arming musicians with enough theoretical wisdom to understand how the notes on the fretboard correlate to whatever chords you throw at them.

This year, he’s been working in collaboration with the MI school in Los Angeles to launch the ultimate online course for conquering the instrument.

“There are a lot of guitarists who are great players but lousy teachers,” he continues. “They call it teaching, I call it showing off. This MI Online class is anything but showing off; it’s very down-to-earth, nuts-and-bolts stuff to help you learn guitar… not as a guitarist, but as a musician.

“Myself and Stig Mathisen, who is the head of the guitar department in Hollywood, put together a 10-week course that pretty much runs the gamut from the beginning guitar tools you need to advanced stuff like playing motifs through chord changes and heavy jazz theory.

“It’s all from an artistic viewpoint - of course there is technical stuff you have to lay on people, the tools and the rules, but it’s based more on the artistic side than the technical side. We made something very down-to-earth and super-easy for anyone to understand... we’re very proud of how it turned out!”

Perhaps one of the main reasons Henderson stands as one of the greatest axe educators around today is his extremely varied discography - ranging from funk to rock to blues to fusion jazz.

It’s given him a level of insight few can compete with, from the number-crunching theory hat needed to play over fast jazz turnarounds to the most ripping blues phrases he unveiled on 1994 solo debut Dog Party - which sounded like Stevie Ray Vaughan on steroids…

“I guess I’ve covered more styles than most guys,” he ponders.

“I’m very open-minded about the music I listen to and the music I play. I’ve been influenced by people from different genres. I’m lucky that way, I guess!

“As much as I love straight-up jazz guitar, I never wanted to be a straightforward jazz guitarist. The same goes for rock and blues… I never wanted to be any one of those things; I just wanted to do what I do. I guess I’m an all-round musician more than I am a jazz or rock guy. To be honest, when it comes to genres, I don’t know what the hell I do - I just mix it up and enjoy the variety.”

Variety may be the spice of life for his musical endeavours, but when it comes to his signal, Henderson prefers to stick with the old favourites. He has his own signature Suhr guitar and amp, which probably explains why he’s never really felt the need for anything else…

“I haven’t changed my rig in such a long time,” admits the guitarist. “If it ain’t broke, don’t fix it, right? People are always trying to get me to use their pedals, and for many years, I’ve been a happy guinea pig to test things, but I never end up using any of it.

“Maybe in the studio for layering stuff, but as far as my main pedals that are on the ’board - the ones I use live - it’s been the same for the last 15 or so years.

“I’ve also got a signature Xotic RC Booster, and my main distortion has been a Maxon SD9 since forever… it’s a great distortion pedal because it’s so useful on any pickup, neck or bridge. I’ll use the Klon in the studio because it’s my favourite distortion to record with, but it’s so big to carry around on a board, I can’t really take it out with me.”

1. Know every note on that neck

“Here’s something that unfortunately nobody playing guitar seems to want to do - and that’s learning all the notes on the ’board. Learn your key signatures, different chord types and where their related notes are on the neck.

“You almost have to see your guitar as five pianos, instead of across the neck in shapes and patterns. If I ask someone to play me the 3rd of B flat, they should know that it’s D and exactly where to find it in every place on the neck. That’s how you learn your instrument, not patterns and shapes - that stuff is kindergarten in comparison.

“It’s not about licks, though transcribing them can teach you a lot. The problem is if you just learn them ad verbatim, you are quoting someone else; you’re not actually improvising yourself.

“When you learn a lick, think of it as learning a word you can use in all sorts of situations - it’s about joining it to other ideas, just how we use words that get mixed and matched into different sentences. Widening your vocabulary is not about playing licks you’ve learned - that’s not going to get you anywhere.

“That’s why learning every note is something we really stress on the MI Online program. You can’t get through the rest of the material until you’ve done that first. There seems to be a different outlook of teaching on guitar, because it’s laid out in a symmetrical way that other instruments are not.

“You have to ignore the symmetry and look at the guitar exactly how a piano player or saxophonist would look at their instruments. They can’t play a G major triad, move it up a fret and say it’s now an A flat triad… they have to actually know: G, B, D becomes A-flat, C, E-flat in order to play that. Guitar players just move up a fret - they’ll know what an A-flat chord is but have no idea of what notes are in it. That is extremely dangerous and extremely non-productive, especially when you are playing through chord changes in jazz.”

“If you want people to hear the chord changes while you play over them, it’s better to concentrate on chord tones with larger interval skips. Licks can help develop your ear, which is great, but knowing the notes before you even hear them is even better. It’s more enjoyable for the audience and the player when you learn the actual chord tones and don’t think about the scales.

“Playing scales can sound one-dimensional because everything is joined by a half-step or whole-step. So another thing we do is get students to widen their intervals, rather than play such linear and scale-based things.

“Hitting the chord tones helps you get rid of the comping; you won’t need someone playing chords behind you any more because everyone can hear the changes in your phrasing.”

“This is coming from more of a personal taste thing than anything technical, but it really is important to keep your ears open to different styles and avoid being one-dimensional.

“So many players get into metal and it’s all they listen to. People get into a clique, the metal guys hang out with the metal guys and if it was discovered that one of them was listening to Beyoncé, they would be kicked out of the group! It’s so ridiculous, because to them it’s not just music, it’s a lifestyle… which is ridiculously stupid.

“We had a year in MI when metal was huge and all the students were constantly listening to it. Then when Tower Of Power came to MI, those guys got a real lesson. It exposed them to great music outside of the metal world, because Tower Of Power kicked ass!

“The metal guys had no idea music could be so powerful without distorted guitars in it. So make sure you stay open and realise that your favourite kind of music isn’t the only thing out there.”

4. Sit down and transcribe

“For me and many other players, transcription has been a big part of learning. You can go to a school and learn all the theory you want to, but the best teachers are our CDs. It’s great being able to study like that, but I very much doubt your teachers will play as well as John Coltrane - and he’s right there in your collection.

“Make players like that your teachers as much as the guys at school. Sit down and do your homework by transcribing - because all the best players have transcribed from the best players. There’s really no excuse not to do it with all the slow-downers and various bits of technology out there.”

“It’s very important, at least during your learning process, to have a great private teacher. Obviously it’s great to take an online course or go to a music school - but everyone needs that one-on-one tuition.

“At MI, one of things we offer is a private lesson once or twice a week, because that experience and feedback is really important. Even with our online guitar program, after each weekly video lesson, I offer more follow-up time in a chat room where students can ask me whatever they need to know. Whatever needs further explanation, that’s what I’m there for; it’s all about that feedback and contact.

“We all have things we need to ask in order to know. I’m not saying you need to study your entire life with an instructor, but you will learn a lot faster if you have one there. You only need it for a few months or a year, but having someone to guide you along is very important. We all need people to bounce ideas with and listen to critical ears.”