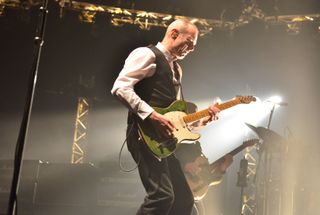 Last month we reported that the green Fender Telecaster that Status Quo mainman Francis Rossi used in the band for 46 years was going to auction in London. Now it's sold, maling Rossi a hefty profit on his original £75 investment.

The guitar, with a '57 body and a number of modifications, went under the hammer at Bonhams in London, with Rossi reflecting, “The green Tele served me extremely well for almost 50 years and I'm always amazed when I look back and realised what a chequered history we had together.”

He originally bought the guitar in Glasgow back in 1968 and it was originally sunburst. In the video below from 2014, he tells Total Guitar more about his history with it and some of the changes he's made to the guitar over the years.

Rossi first it on for recording on 1970's Down The Dustpipe album and nearly every record and single up to 2015. It was his main gigging guitar until 2015 too, before being retired due to a tuning issue.

Status Quo will head back out on the road in October year in support of Backbone, their first album recorded without the late Rick Parfitt, who passed away in 2016.