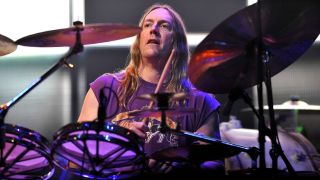 'Amazing' is one of those words that is loosely attributed in 2020. But when you're genuinely stopped in your tracks by the sound of a kit, and the notes being produced on it, amazing is exactly the word to describe it.

Danny Carey, the towering drummer of Tool has never failed to impress with interesting drum parts, and technique that's nothing short of amazing since the band first arrived with the Opiate EP in 1992.

Prior to this, Carey had performed a stint in comedy/shock rockers, Green Jello. Who would have guessed that the guy holding the sticks on Three Little Pigs (credited as Danny Longlegs) would go on to be one-quarter of one of technical, heavy music's most influential bands.

Since then, Carey has continued to turn heads across all genres with his work in Tool, seemingly raising the bar higher every time. Tool albums aren't just a casual listening experience, they require concentration and, at times, effort to even get close to understanding exactly what the hell is going on!

But, the reward for us drummers is a catalogue of consistently brilliant drumming - and that's before we even consider Carey's various side-projects such as Volto!, Legend Of The Seagullmen or his work with Carole King.

Here, we're focussing strictly on his output in Tool (a near-impossible task in itself). So, come with us on a winding path as we navigate a modern drum hero. And get ready to count…

It’s not until the nearly-two-minute mark that Carey enters on this - possibly the most ‘drum-covered’ Tool song. When he does, there’s some irony to the fact that one of the greatest progressive drum tunes of the century remains largely in 4/4.

But this is Tool, and while the pulse stays simple, Carey weaves his way round the guitar riff to create interesting accents. By the four-minute mark, we hit 7/8, which is when Danny really takes flight, launching into 16th-note triplets round the kit, playing over the bar line to create mind-melting accents before ending it with a two-bar fill that lands with deathly precision.

The final stabs of the song take us into a hypnotic five-note accent pattern that repeats seven times. Some drummers are skilled at implying 4/4 over an odd time to keep your head nodding, here Carey twists the limits of the simplest count to create something more masterful.

When it comes to 5/4, it's hard to escape the blockiness instilled in our brains by the theme from Mission: Impossible. But as Tool open Lateralus the whole band weave their way around the timing sounding like a heavy Pink Floyd.

Carey's post-verse bass drum pattern expertly accelerates from quarter-notes through eighth, triplets, semi-quavers and into 32nd-notes, giving us not only some excellent listening, but a bass drum workout exercise to boot! Jump to the 3:30 mark, and you're rewarded with a series of fills that - with the snares off - make every note defined before Carey explodes with one of his trademark 'where's the one?' grooves.

If that wasn't return enough, the closing outdo is a statement of arrival, as Carey comes at us with a barrage of displaced grooves and fills, hammering home 35 seconds of mind-blowing technique, without ever forgetting what taste is.

For a band who are generally considered not-of-this-world by most rock musicians, it’s surprising how often you can actually tap your toe to Tool. With a casual listen, Eulogy - rumoured to be in-part about Kurt Cobain -  is eight-and-a-half minutes of powerful, grooving 4/4 rock.

Carey’s knack for picking the ‘right’ accents when it counts makes Eulogy an approachable playalong for intermediate drummers, even getting funky with his hi-hat accents during the first ‘breakdown’ around 5:25. But by the time the song evolves back into the second ‘breakdown’ a minute later, Carey pulls out an understated gem.

The Bohnam-esque kick and snare pattern would have been enough on its own, but the hi-hat pattern takes things up a notch with open accents on every third sixteenth note. It’s a tricky groove to recreate, but once you’ve got it you’ll find it addictive.

This cut from Lateralus is enough to grab the attention of any drummer from the off, with it’s dancing sixteenth-note 7/4 tom pattern reeling us in. There are enough notes to tire most drummers out by the time the guitar kicks in properly, but Carey puts both feet down playing perfectly synced double pedals underneath his already busy groove.

The song remains in 7 for a lot of the time (spare the odd 4/4 bar between sections), but switches back and forth between bars of 7 and 4 before the extended breakdown section in the middle.

Around six minutes in, Carey revs up again, delivering a punishing final couple of minutes incorporating a further developed version of the intro groove that will leave you needing a quick sit down before you'll immediately want to listen to it again. Lateralus features heavily on this list, and that's mainly due to the sheer abundance of moments such as this!

Choosing just five songs from a drummer who provides literally years of potential learning on every album is difficult. We could double this list and still not nearly capture all the 'wtf?' moments Tool's output has provided, but we think its fair to say that 2019's Fear Inoculum is largely Carey's album.

Pneuma is vintage Tool typified and Chocolate Trip Trip is basically a drum solo with some other stuff going on in the background. But we're going with Invincible as our pick from Tool's latest.

This constantly-evolving, near-13-minute epic has a slice of everything we love about Danny Carey's playing: metal chops, perfectly executed accents, genius manipulation of time and a drum sound that's nothing short of amazing. Settle in, wear headphones and understand why many people consider him untouchable in the modern prog genre.