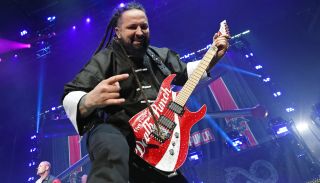 “The tour is going fantastic, every show is sold out so not much to complain about these days!” When we speak to Zoltan Bathory, he’s a week into Five Finger Death Punch’s European tour and loving sharing a stage with his metal heroes.

“One of my all-time favourite bands, Megadeth is with us. We really can’t complain. We haven’t jammed yet, but who knows. We still have 18 days left so we’ll see what happens!” A few days later, lead guitarist, Jason Hook is forced to leave the tour due to problems following gallbladder surgery at the end of 2019, while UK shred sensation, Andy James dutifully steps in to take his place.

Today, though, Zoltan is here to tell us about his approach to playing. He’s well known for being both highly accurate and powerful when it comes to his rhythm chops, and it’s clear when speaking to him that this isn’t by accident.

FFDP’s latest, F8 (released on 28 February), sees the band’s stadium-filling sound branch-out a little. It’s the first FFDP record to feature drummer, Charlie Engen, who joined the band in 2018, and Zoltan has clearly enjoyed the new rhythmical directions and possibilities this is allowing him as a rhythm player, “We have a crazy drummer in Charlie. I can throw anything at him and he can do it. I can say ‘Hey man, give me an 11/8 transitioning into 7/8 and then 4/4’ and he’s like ‘Alright, here you go!’”.

As well as the new rhythmical powerhouse, F8 sees the band - who are no strangers to internal struggles at times - regroup with a common goal, and even an ear for some more diverse influences.

“Every band always says that their new album is the best and their most favourite, and that’s what it is. That’s just what they have to say! I will make no exception, however, if you hear the record you’re definitely going to hear that there’s a different energy and approach . It’s probably due to the focus. Everybody got sober and the band is simply razor-sharp focussed right now.

“From the perspective of guitar playing, it has obviously affected that and the song structures as well. We wanted to open the aperture a little bit. This band has its own sound and we have these specific things that we do.

"[Jason and I] are very different guitar players in some ways: he grew up in America, obviously, with American rock music with a lot of blues and rhythm base, so that’s where he’s going to come from. Whereas I’m European, and even if you don’t listen to classical music it’s in your blood, it’s in your ear. So instead of concentrating on the rhythm of things, you’re living off the harmonies and the melodies.”

It's the dynamic of those elements that is central to the FFDP sound, but as Zoltan explains there's some fundamentals that are essential for all players…

“I always say to people - play with a metronome. But there’s another method and I also use this for writing. Like everyone else these days, I have drum sample libraries up the wazoo, right? We all have thousands and thousands of drum samples, and generally I don’t practice or write with rock drums.

"So I’m going to pull up a hip-hop or R’n’B or some weird sort of rhythm that is typically not rock or metal. Otherwise you’re going to fall into that rock and metal place where you play all the stuff you’ve played before, and what all other rock and metal players do.

"So I actually write most of the songs with hip-hop beats, it has a different swing. A different groove. Or I’ll find African beats and practice different beats and grooves with them, and also write with them.

"Then once I bring it to the studio, it has a specific swing or groove that I probably would never get if I was writing to a rock or metal beat. Then the drummer has to catch that groove.”

"When you’re recording, you’re probably going to record at least four rhythm tracks. And you can’t really play with the same tone that you use live. When you play live you have to fill up that space alone, or with the other guitarist if you have one. But when you’re recording and tracking the same part four times or more. What happens is it just gets way too fuzzy and the clarity just goes away. So generally what I do is roll back the gain considerably.

"When I record, my gain is set at about half what I would use live. Because I know that I’m going to repeat it four or maybe six times, and all of those takes will add up. I’m very much into this percussive, palm-muted clear and heavy attack. I want every note to be heard, and if my gain is high that will simply die in the noise."

"Consistency matters, so I use the same guitar. However, we also re-amp, so I’ll use complimentary sounds. Let’s say one of the sounds will be a really nice compressed sound with lots of low end that’s really precise.

"Lot’s of players get that sound by hollowing out the sound and losing all of the mids. So you’re going to need to record another sound that - on its own - probably sounds horrible, but it’ll fill up that hole and together they’ll create that one full guitar tone.

"We always record the actual sound, but I’ll also keep the ‘naked’ sound of the guitar so that we can have the possibility to re-amp if we need to.

"It’s the same guitar generally within the same song unless I want to lay down something very unique. If I’ve already done my rhythm tracks and I want to add some candy then I might reach for a semi-hollow. "

4. The low-down on tuning

"So obviously there are things you can go for from the get-go: seven or eight-string guitars or a baritone that are all built for that. But any of these situations will involve heavy, heavy gauge guitar strings. It’s something you can’t get around, you will have to learn to play with heavy gauges.

"I play a six-string guitar, 24-frets, neck-thru and I put really heavy gauge strings on them. My strings are basically 70-.13 or 66-.13. So if you switch, it will take you a moment if you’re used to a regular set. You just have to do it, get the micro-muscles in your fingers used to the super-heavy strings.

"I’ve been playing baritones for 20 years-plus. So if I pick up a regular guitar it’s like ‘Oh shit, I have to watch I don’t rip off the neck!’. But it does develop a different style, you’ll start to play in a different way because you really have to move these heavy strings.

"The way you pick and use the slapback from the strings becomes part of your playing. So I would say that when I switched to baritone guitars around 1999 I almost had to learn to play all over again. Certain things like vibrato - it’s not going to be as nice as on a guitar with 9-gauge strings, it’s just the name of the game. But it changed my playing, I think the percussive thing happened because I really had to dig into the strings."

"If you’re sat down then that’s all well and dandy, but the second you stand up and you don’t want to use your guitar as a bow-tie, what’s going to happen is your hand will be in a position where the lower your guitar goes, the more you’re hitting the string at an angle. It means that the noise from the pick and the string is even more pronounced.

"I had this idea ‘What if I twist the pick?’ so even though the guitar is low, my pick is still hitting the strings at 90 degrees. So that’s why I use these, it’s called the Dunlop Speed Pick. I wanted to patent it, but then I realised somebody had a patent on it already. So I went to Dunlop and said ‘Can you guys acquire this patent?’ They said ‘Actually, we own it.’. Because of me they started making it again! But it really makes a difference, it’s much cleaner and every note is very pronounced."

6. Keep a clear signal path and get your height right

"I don’t have anything in my signal chain really, I’m as purist as can be. I go from my wireless straight into the head, there are no transistors in my [front end] signal chain, it’s all tube.

"Then in my effects chain I have a TC Electronic unit to get a little chorus, reverb or delay or whatever. Actually, I have a noise gate [in the front] too. But that’s it.

"If anything I would advise messing around with your pickup height. It matters, it really matters. Not just in output, but the voicing and how much feedback there is, how much low end beef there is. If the pickup is too close to the string then you’ll lose that.

"So you have to figure out the pickup height. Then I set my amp to a place where it’s balancing on the edge [of breaking up]. So now I have these heavy strings, and I set it to a place where the strength of my picking really matters.

"If I hit them hard then there is more gain, if I don’t hit it hard then it breaks up and you can really play with that."

"I always rip out my volume pot too. With my BC Rich guitars, they come with a 500k linear pot. Because with an exponential pot it’s hard to know where your volume is. It’s a bit of guesswork, because it’s not linear, with a linear pot I know exactly where I am.

"I ride my volume pot, I’ll change my volume 35 times within one song. For certain parts I’ll need a little bit more gain, like single-note stuff. If I’m going back to percussive rhythm then I’ll roll the volume back so there’s more pronunciation.

"So I really try to set-up my amp to where I’m controlling the sound with my hands and the dynamics of my picking strength."

"I have a killswitch, and it’s placed below the two pickups, but exactly in between them. So when you’re playing your ring finger or middle finger can reach. It’s a micro-killswitch, but it’s super fat.

"We used to do that with the pickup switch, it’s just not as precise: you roll off the volume on your neck pickup so that only your bridge pickup is on, then you take the toggle switch and just shake it.

"Obviously in a studio environment, it’s easy to chop things up and create that effect in Pro Tools, but I can perform it with a mute button."

"There’s a lot of stuff that’s hidden in our music that you have to listen out for, maybe guitarists might notice but most people don’t. I do a lot of little two or three-finger tapping tricks, but I’m not putting these things there as leads.

"They’re mixed into the track as rhythm patterns, really low. That’s been around forever, we’ve done that on every record. For the public it’s just an interesting sound, but for a guitarist it’s like ‘Woah, what happened there?’ you’re definitely going to notice that there’s something going on, but you might not be able to tell straight away. It’s like ear candy!”